Macarons with Kumquat and Rosemary

Its been a while since I last tackled Le Macaron. After some failed attempts I decided it would be better if myself and the almond flour have a break from each other. It wasn’t going to be long term or even final (gasp), we just needed our space man.

Until today when I reached for something else in the cupboard and there was my old friend, like a bear waking up from a winter sleep. I knew it was a macaron day, but as I mentioned before cracked shells and feet less mac’s were haunting me. My friend Jill Colonna, the legendary author of Mad About Macarons once left me a comment telling me not to sweat it when making macarons and to take it easy. 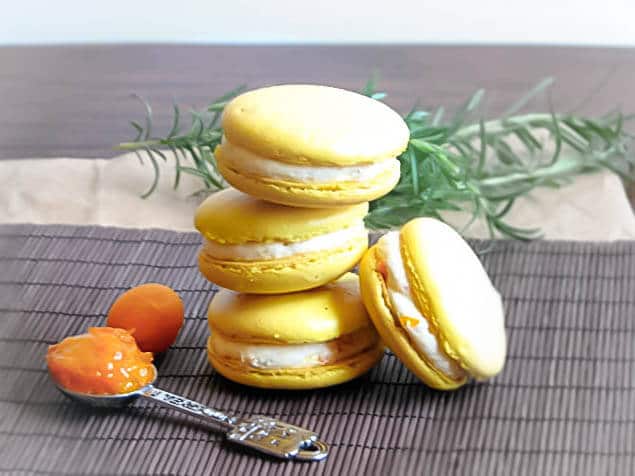 Maybe this advice is right. Today I just dived right in and didn’t care too much about whether my egg whites were old enough or if I had stirred fifty times or fifty and three quarters, or if the humidity in my kitchen was 5% less than it should have been. I’m not saying these aren’t important factors and I’m not trying to pee off the professionals like Pierre Herme who might read this post (Yeah.. Pierre goes on Blogger, not much)  maybe I just got lucky, but I’ll take it!

For me the fun part is filling the shell. I had a bag of kumquats which I’ve never cooked with before but after some research it seems like everyone makes some kind of marmalade. I threw them in a pan with sugar, water, a sprig of rosemary and vanilla and boiled them until it was a sticky syrup. After cooling, I chucked all of the pan mix into a blender and gave it a buzz. The jelly was a little on the strong side to eat on it’s own so I mixed it into some butter cream I had on hand and it became an awesome citrus cream.

Macarons, It’s time to pipe, fill and eat you….watch your back.

For the macaron recipe click here. The butter cream recipe is below, courtesy of The Savory Sweet Life. I always use this recipe for butter cream and It’s never let me down.

1 cup unsalted butter (2 sticks or 1/2 pound), softened
3-4 cups confectioners (powdered) sugar, SIFTED
1/4 teaspoon table salt
1 tablespoon vanilla extract
up to 4 tablespoons milk or heavy cream
Beat butter for a few minutes with a mixer with the paddle attachment on medium speed. Add 3 cups of powdered sugar and turn your mixer on the lowest speed (so the sugar doesn’t blow everywhere) until the sugar has been incorporated with the butter. Increase mixer speed to medium and add vanilla extract, salt, and 2 tablespoons of milk/cream and beat for 3 minutes. If your frosting needs a more stiff consistency, add remaining sugar. If your frosting needs to be thinned out, add remaining milk 1 tablespoons at a time.