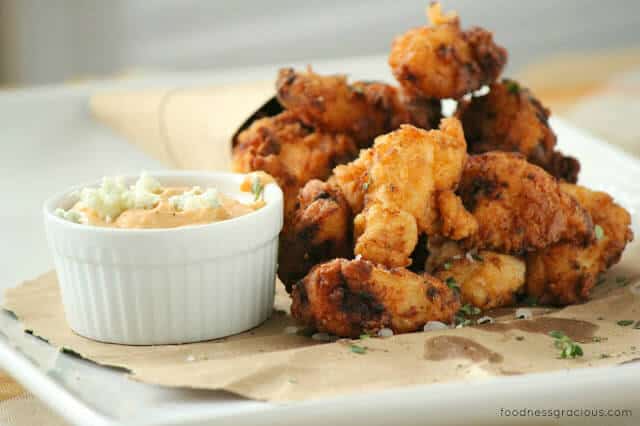 It’s safe to assume football is a pretty popular game here in the United States. Personally I can’t make head nor tail of it. I grew up in the world of soccer, which is football to me but let’s not open that can of worms. This year the Super Bowl will be played on Feb.3, and while I can’t tell the difference between a touchdown and a touchback (anyone?) I do know about the crazy amounts of game time food which will be eaten that weekend. And yes these nuggets are fried and not baked, I tried baking them but just didn’t get the same crunch as the fried version, but using skinless chicken breasts can save you at least a little amount of calories!

Super Bowl Sunday is the second highest day for eating of the year, Thanksgiving being the first. And right now the blogging world is bursting at the yoga pant seams with all sorts of snacks and munchies. Buffalo chicken wings are the most popular item to serve with around 90 million being eaten. I kind of like chicken wings but I’m not like my daughter and Mrs FG who suck those bones clean, I prefer the white meat. The original recipe for these nuggets was actually for whole fried chicken breasts but I chopped them into little nuggets and fried them like that. They’re much easier to eat without the bones, just dip em’ and pop them into your mouth. The spicy blue cheese dip is the perfect accompaniment for these bite size fried jewels. Made with Greek yogurt, maple syrup and Franks Hot Sauce this dip would be just as amazing with a bowl full of chips!

Recipe for Fried Chicken Nuggets: From Bon Appetit
Prep Time- 40 minutes    Cook Time- 4-5 minutes per batch    Makes- About 24-30 small nuggets
Chicken marinade-
1 cup buttermilk
2 teaspoon hot sauce
1 minced garlic clove
1/2 teaspoon fresh thyme
1/2 teaspoon kosher salt
Black pepper
4 skinless chicken breasts, chopped into 1-2 inch nuggets
Dry mixture-
1 cup all purpose flour
1 teaspoon kosher salt
1 teaspoon paprika
1/2 teaspoon black pepper
1/4 teaspoon cayenne pepper
Canola oil for frying
Mix first six marinade ingredients together in a bowl. Add the chopped chicken and coat well. Let sit for at least four hours or overnight.
In another bowl, mix together the first five ingredients of the dry mixture. Place a large skillet on a medium heat with about one inch of the canola oil in it. Using a thermometer, heat the oil slowly to between 350-360 degrees.
Working in small batches of about six nuggets, toss them in the flour coating well. Place them on a wire rack and toss the other pieces of chicken until all have been coated and are ready to fry.
When the oil has reached temperature, gently place about eight nuggets into the oil. Cook for about four minutes until golden brown. Using a spatula or tongs lift each nugget from the oil and drain on some kitchen towel. You’ll have to keep a close eye on the oil as it’ll get cooler when you start to cook the chicken. Turn up the heat slowly to keep it at 360 degrees.
Sprinkle with sea salt and chopped thyme, serve warm along with the spicy blue cheese dip.
Spicy Blue Cheese Dip:
2/3 cup plain Greek yogurt
2/3 cup blue cheese crumbles
1 1/2 tablespoon Franks Red Hot Buffalo Sauce
1 teaspoon regular hot sauce
1 teaspoon maple syrup
1/2 teaspoon chili powder
In a medium bowl whisk the yogurt and blue cheese together. Add the rest of the ingredients and combine until smooth and creamy. Store in the refrigerator until ready to serve.