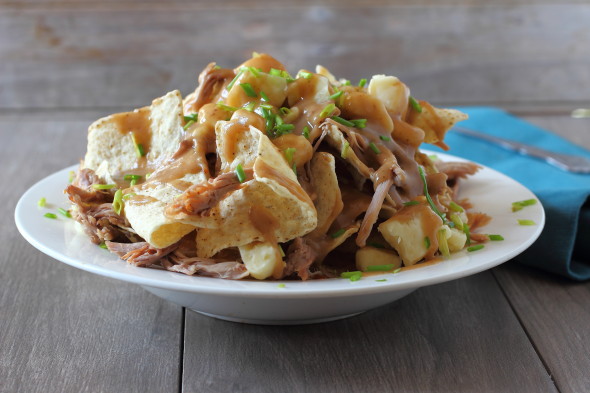 I really wanted to squeeze in another game day recipe for Super Bowl Sunday and you’re going to love this one, It’s everyone’s favorite sports game snack. Tortilla Chips covered in rich brown gravy, cheese and smoky pulled pork. I give you Poutine Nachos.

Traditional poutine is a Canadian recipe, made of french fries and topped with cheese curds and gravy. It doesn’t exactly sound gourmet but it’s total comfort food at it’s best. I tried it in Vancouver and it actually reminded me of a popular post-pub snack from back in Scotland, minus the cheese. It’s the perfect game day food- like these Fried Chicken Sliders– but seriously, who wants to be stuck in the kitchen making fries when the game is on?

Nachos aren’t something you eat everyday. But when you do, they have to be dripping with sauce and packed full of ingredients that’ll pop the button on your pants. Usually cheese sauce is used but my nachos have a beef gravy instead covering the famous cheese curds that make poutine what it is. The curds are similar to mozzarella and become gooey soft when the hot gravy is poured on top. You could serve the nachos just like this and you’d still blow people away with the taste, but add some pulled pork and you’ve created the best nachos ever! Pulled pork does takes a while to cook, but I put it in the oven before I went to bed and it was perfect in the morning. A little weird waking up to the smell but so worth it, and with the extra pork you can make some pulled pork sliders! 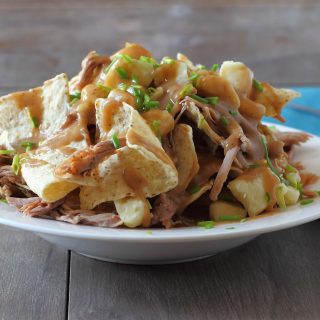 Cheese curds can be hard to find in some states. You can replace them with chunks of mozzarella or farmer cheese.