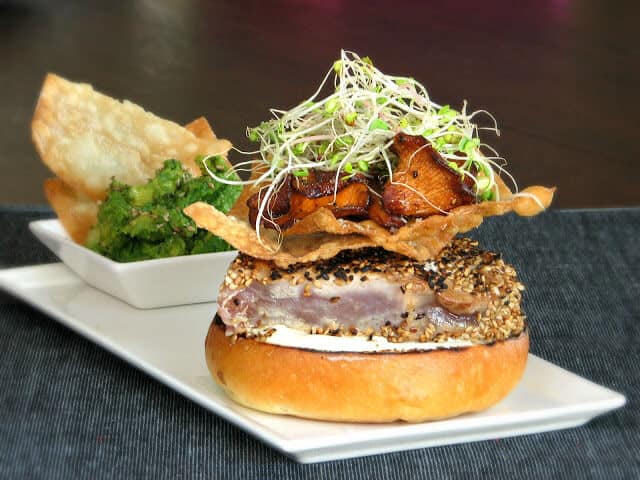 This Monday, the 3rd of September is Labor Day here in the U.S. and people all over will be firing up their grills and filling coolers full of beer. But instead of sticking to the old favorites like burgers and hot dogs, why not try grilling some fish. It’s fast, healthy and there’s so many varieties to choose from like…..these seared ahi tuna steaks!

I was torn between chopping them up and making a patty or keeping them as a whole piece. I consulted with one of my top testers and she told me if it gets chopped up it would be a burger, but if I kept it whole then I’d have to call it a sandwich. I really didn’t feel good about chopping up such a nice piece of fish, salmon I’d have no problem with but this was like an aquatic version of filet mignon and I’d never grind that up for a burger! I marinated the tuna in a blend of sesame oil, rice vinegar, soy sauce, garlic and ginger for about 40-45 minutes, no more or the flavor will take over the fish.

Before I make something like a burger or a sandwich, I try to picture it in my head (crazy?) or even sometimes I’ll draw a quick picture of it on a post-it (crazier?) but it has to be balanced and also easy to eat. In almost every sandwich I make there will be some sort of cheese, but this time I decided to skip the cheese layer and replace it with a couple of fried won ton’s and some sauteed chanterelle mushrooms. Of course there’s nothing worse than a dry sandwich so my base spread was a wasabi mayonnaise. My sandwich was nearly complete but it lacked some color so I topped the whole she-bang of with some clover and radish sprouts. Lets not forget the tuna…I dipped both sides in some toasted sesame seeds and then seared them over a ridiculously high heat for about a minute and a half each side. Tuna has to be eaten with a raw center to appreciate it’s texture and flavor so get the best you can. I look for brighter pieces of fish, almost crimson in color as I believe the older it gets the darker it becomes. 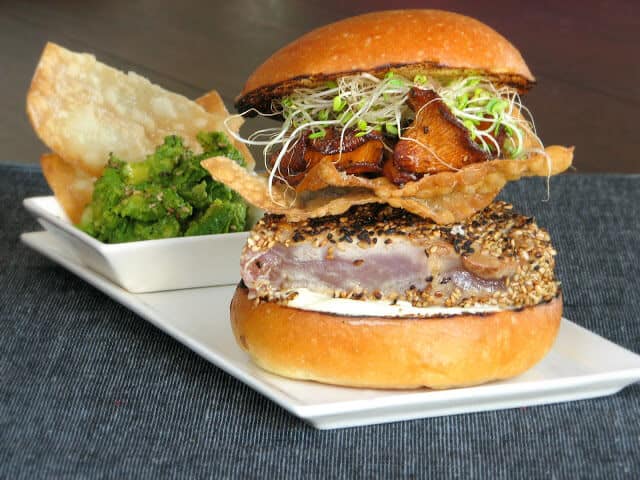 Combine soy sauce, sesame oil, ginger and garlic in a 13×9 dish. Place the tuna steaks in to the marinade and coat evenly. Cover with plastic and keep in the fridge for about 40 minutes. Use this time to prep the rest of the ingredients.

Toast the sesame seeds in a small pan, watching them carefully as they burn really easily. Set aside.

Heat the canola oil in a pot about 2 inches from the bottom. When the oil reaches 375 degrees, drop a won ton square into it and let it cook for about 40 seconds and then flip it over for another 20 seconds. Transfer to a plate with a paper towel on it. Make as many as you like, they’re great for snacking on and I loved using them as chips for the avocado I served with this sandwich.

In a pan, melt the butter and saute the mushrooms until cooked, about 7 minutes.

Heat the grill to a high heat. Take the tuna and sprinkle each steak liberally with the sesame seeds. Place each steak on the grill. Grill for about 1 1/2 minutes and turn them over, continue cooking for another  minutes or so. Longer if you prefer them less on the rare side. Transfer to a plate.

Spread each bun with some wasabi mayonnaise. Place a piece of tuna on top, followed by a couple of won ton’s. Top with some mushrooms and crunchy sprouts. I made some chopped avocado with sesame oil and sesame seeds to go along side the sandwich.