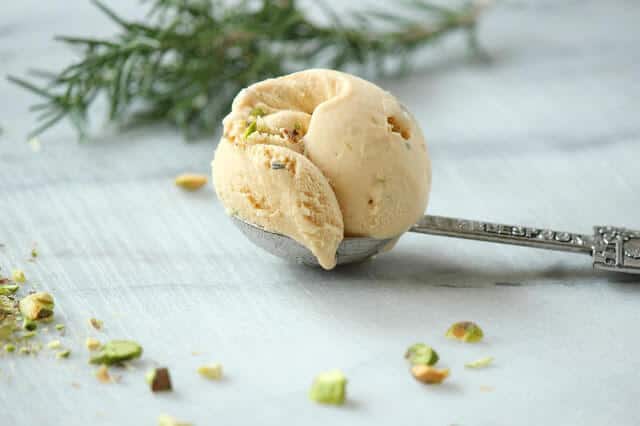 I’ve been wanting an ice cream maker for a long time and someone in the house has been listening! I guess if big enough hints are dropped they might get picked up. So when I unwrapped a box on Christmas morning and a giant Cuisinart fell out I was quite chuffed. True, there’s a planet’s worth of funky flavors available at the store, but don’t you ever think that your own flavor ideas would be much better than what’s in the freezer aisle?

Not only did I get the Cuisinart but I also got Jeni Britton-Bauer’s crazy good ice cream book called, Jeni’s Splendid Ice Creams at Home. This book is packed with recipes and a great story on the struggles she had to overcome to realize her dream of becoming an ice cream queen. I know I’ll be making bucket loads of ice cream in the future. I have a million ideas swirlin’ around in my head!

The flavor idea for this ice cream came from my pistachio and rosemary caramel- sold through my Etsy store. It’s the most popular flavor and surprises almost everyone who tastes it. Nobody thinks that rosemary will work in a caramel but as soon as they pop it in their mouth, the eyes widen and eyebrows rise up. I used Jeni’s salted caramel ice cream recipe and added roasted pistachios and fresh chopped rosemary. I think I nailed it. 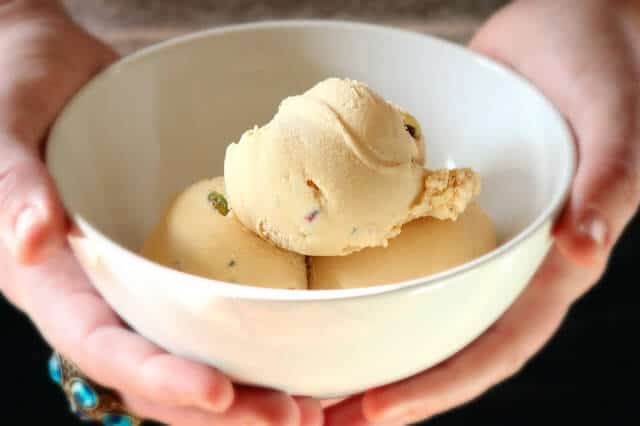 This is where I toot my own horn a little. Sure, Jeni came up with a really freaking fantastic caramel ice cream (this girl is an ice cream genius) and this ice cream is like licking velvet, but then I added the pistachios and rosemary. The result, super-silky-smooth, creamy, salty and caramely with a crunch from the pistachios and lastly the rosemary. Wig-out crazy tasting good!

Mix two tablespoons of the milk with the cornstarch. Whisk the cream cheese and the salt together in a medium bowl. Mix the cream and the corn syrup together. Have a large bowl filled with ice.

Heat the sugar in a 4 quart pot over medium heat until it turns a deep amber color. Watch it carefully because it will burn very quickly. Remove from the heat and add about 1/4 cup of the cream/corn syrup mix to it.

Keep adding the cream while stirring all the time. Add the whole milk and return to the pan. Bring back to a boil and boil for four minutes. After four minutes take off the heat and whisk in the cornstarch mixture.

Bring back to a boil stirring continuously until it gets thick, remove from the heat. Gradually add it to the cream cheese and whisk until smooth. Pour the mixture into a large zip lock bag and store in a bowl in the fridge or fill the bowl with iced water and chill for about 30 minutes.

Once the mixture is cooled, pour it into the ice cream maker and follow the manufacturers instructions. After the ice cream has formed, about 25 minutes scoop about 1/4 into a plastic container. Sprinkle some of the chopped pistachios over along with some chopped rosemary.

Repeat this until all of the ice cream has been transferred from the canister  Cover with parchment paper and seal with the lid. Place in the freezer for at least four hours before enjoying.