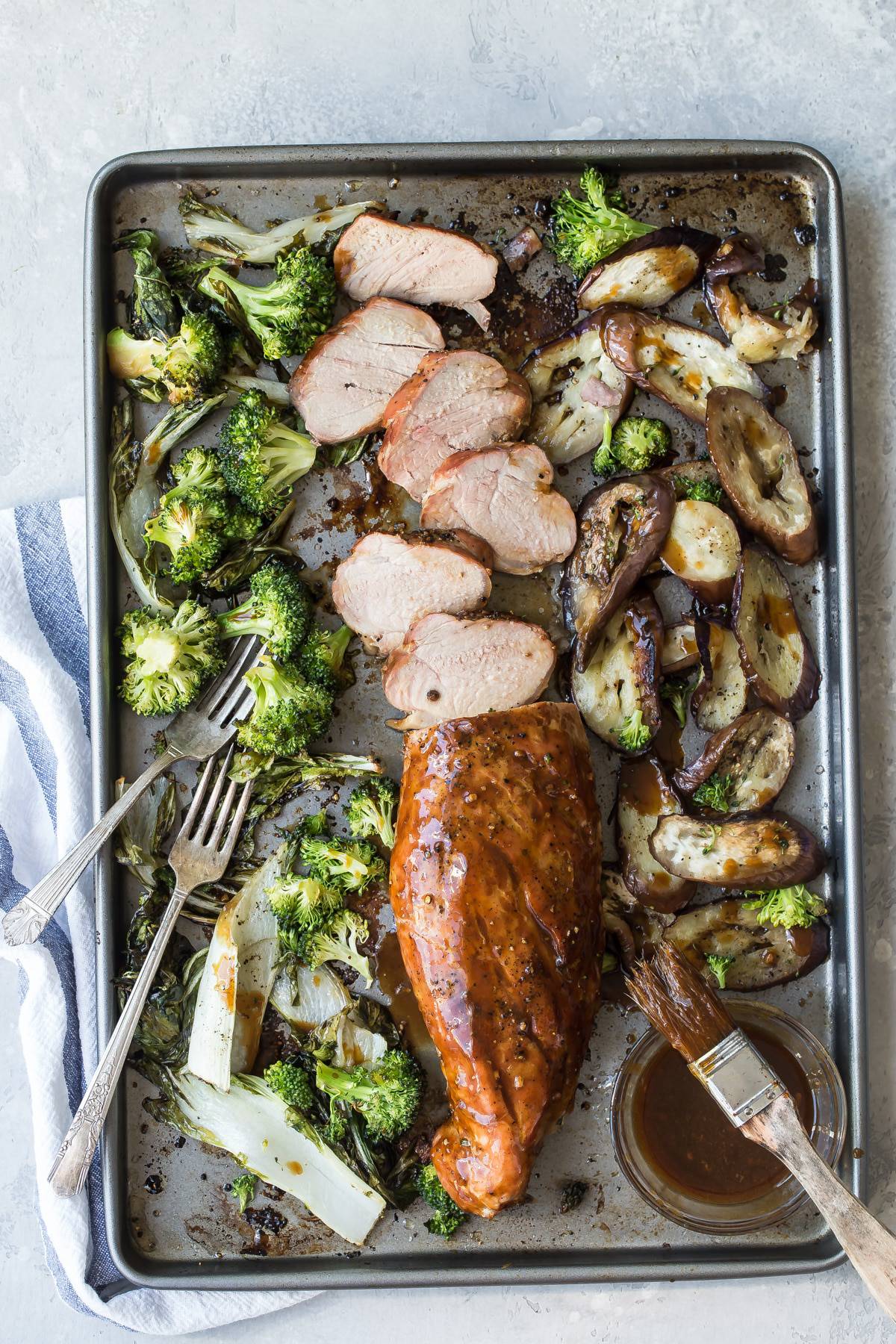 Boneless pork loin with roasted veggies is an easy dinner that cooks up sheetpan style and has tons of flavor. Broccoli, Chinese eggplant and Bok Choy are roasted along with an Asian-glazed roasted pork tenderloin for a delicious and healthy family meal.

I’m all about weeknight dinners with no fuss and no mess. This roasted pork tenderloin recipe has all the ingredients coming together on one sheet pan. It’s a quick way to get a healthy meal on the table for the whole family with less cleanup. Tender and juicy pork tenderloin is glazed with a flavorful marinade of sweet and citrusy orange juice, salty soy sauce, ginger and garlic. Broccoli, Chinese eggplant and Bok choy roast up next to the pork, making a perfectly tasty all-in-one weeknight dinner.

What is Pork Tenderloin

Pork tenderloin is a lean cut of meat that also goes by the name pork tender or pork fillet. It’s a long, thin cut of meat about 2 inches across. The tenderloin comes from muscle that sits underneath the backbone of the pig, beginning just below the ribs and running down to the hip. Pork tenderloin is best cooked at high heat for a relatively short period of time.

Pork tenderloin usually weighs between 1 to 1½ pounds. Look for meat with a pinkish red color and avoid buying pale and colorless pork. Store pork tenderloin in the fridge for up to 5 days before cooking or in the freezer for up to 6 months.

How To Marinate Roasted Pork Tenderloin

Marinating pork tenderloin imparts flavor and juiciness, especially since it’s a lean cut of meat and can dry out quickly at high heat. This recipe calls for an easy marinade made with soy sauce, garlic, ginger, black pepper and orange juice. All the flavors come together for a salty, sweet, citrusy Asian-inspired combo.

You’ll need about ¼ cup of marinade per pound of pork tenderloin as a general rule of thumb. I marinate in a gallon-sized Ziploc bag, turning the pork every 30 minutes or so for even coating. You can also use a glass or plastic container for marinating. I would stay away from metal containers since this recipe contains orange juice and the metal and acid from the orange juice causes a reaction that alters the taste of the marinade.

Marinate pork tenderloin for at least an hour, although 2-4 hours is ideal for this cut. You can marinate it in the fridge overnight if needed.

How To Sear Pork Tenderloin

Searing meat gives it a caramelized surface and builds up complex flavors. It’s a myth that searing traps in juices, but the added flavor and brown crust are enough to keep me searing. Start by adding a coating of vegetable oil to a skillet, about a Tablespoon, and heat until very hot. The oil will start shimmering. Add the tenderloin and don’t be tempted to move it around. The tenderloin will start to develop a nice deep brown color underneath. After a few minutes, give the skillet a shake. If the meat releases naturally, it’s ready to be flipped.

It’s easy to overcook pork tenderloin. It really only needs about 10-12 minutes in the oven at high heat but it depends on the size and thickness of the pork. I always use an instant-read thermometer to gauge doneness. Once the inside reaches 150°F to 155°F, it’s ready to come out. It might be a bit pink in the center, but the juices will run clear. For an accurate reading, insert the thermometer through the end of the tenderloin horizontally. After the pork reaches the desired temperature, take it out and let it rest for 10 minutes. This allows the meat to retain juices when slicing.

The Asian-inspired marinade for this recipe pairs well with roasted broccoli, Chinese eggplant and Bok choy, but really any vegetable is fair game. You can easily sub in cauliflower or Brussels sprouts for the broccoli. If you have to chop it up, make sure it’s no bigger than 1 inch cubed or you’ll bite into veggies that might be hard in the center. Make sure to give all of the veggies a shuffle with some tongs about halfway through cooking so that everything gets nice and evenly caramelized.

What to Serve with Pork Tenderloin

You’ve got the veggies covered, but if that’s not enough to satisfy, then serve your pork tenderloin with a grain like wild rice, quinoa or pilaf. You could even make up some extra marinade and toss it with Asian noodles to beef up the meal.