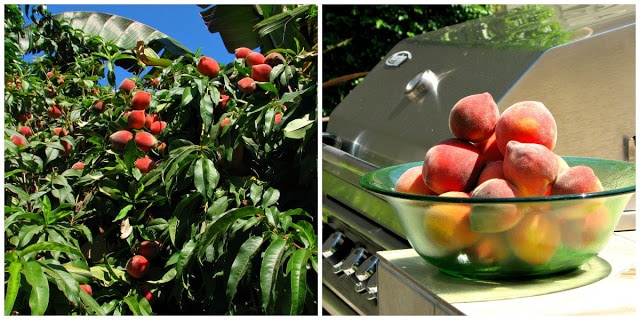 I wouldn’t consider myself a green fingers kinda guy. I can keep a lawn looking good and I can get some pretty good results with herbs, but one day many years ago I planted a peach tree trying not to be too expectant of it. That peach tree grew and grew and has consistently produced fruit every year. I recall last year a large branch snapping off due to the weight of the peach clusters. Each year I always try to maximize the fruit, I don’t like to see it just fall of and rot on the ground but I could be better at it. Today I climbed up my wobbly ladder into a tree full of spiders and other weird looking insects and picked the biggest peaches I could see…and reach without falling backwards into the water fountain. I ended up picking eighteen pounds of fruit which I washed, halved and pitted and then packed them into containers to end up in the freezer. I kept a few to the side for this post and some more for peach margaritas, hey easy with me I don’t like heights and I was at least six feet up that ladder so an alcoholic beverage was just the ticket to calm my nerves!

I chose to make grilled peaches because I probably have the most inventory in North America, and also because I think people tend to skip making desserts on the grill. It’s all geared toward that hunk o’ meat and trying to cook it perfectly, so once the meat and veggies are all eaten, the last thing anybody wants to do is get back up and start grilling. Hey I get that, but usually desserts for the grill are simple and can always be prepared ahead of time. You’ll surprise your guests by producing another grill item before they’ve wiped the rib sauce from their chins. In fact I plan to do a whole bunch of grill desserts through the summer so I hope you get inspired because seriously folks, stuff that gets all charred and carmelizee (whaaat?)  is usually stuff that has an amazing flavor but don’t overdo it. Once your peaches are black there’s quite literally no going back…. 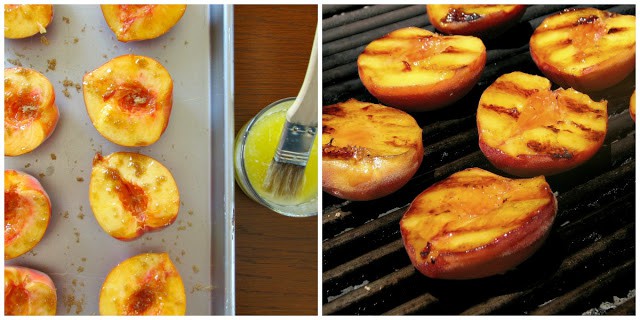 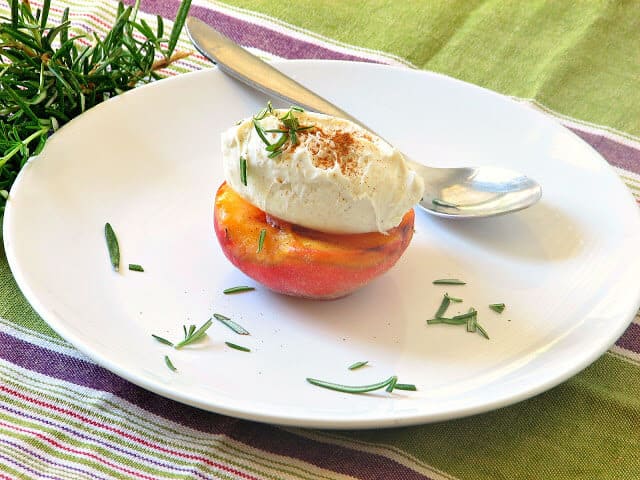 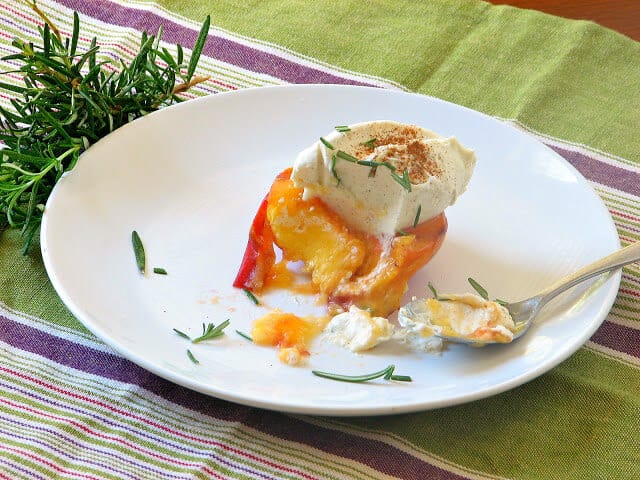 Making these grilled peaches couldn’t be simpler, it goes a little something like this…

4 Ripe peaches
1/4 Cup of brown sugar
3 Tablespoon of butter, melted
8 ounces of mascarpone cheese
1 Tablespoon of honey
1/4 teaspoon of cinnamon
1/4 teaspoon of vanilla extract
1/2 Tablespoon fresh chopped rosemary (optional)
First, make the cream topping. I used mascarpone, a rich cows milk cheese which is a touch sweet and is usually used for tiramisu. Don’t underestimate this creamy cheese, you can use it for loads of things like a dip for all sorts of fruit or as a sauce thickener in some pasta dishes. It’s the white Nutella. Mix the honey, cinnamon and vanilla into the mascarpone and set aside. Ideally you want it to be at room temperature when served.
Take four ripe peaches and half them like you would an avocado, except don’t do that thing with the knife to get the stone out (dangerous) If the peaches are indeed ripe, then you’ll be able to twist the stone with your own muscular motion and out it’ll pop. Lay the eight halves on a baking tray. If your preparing ahead you could cover them and keep them in the fridge like this until ready to grill but if your Jonesing to get the grill fired up then proceed. Melt the butter and using a pastry brush paint each peach (rhymes!) half generously with butter. Sprinkle the brown sugar on top and let them sit for five minutes.
Make sure your grill is blazing hot and then turn off the burners which will be below where the peaches will lay to cook, the residual heat will give the fruit those nice sear marks. You can keep a side burner on just so there’s still some heat available. If your using a charcoal barbecue place the fruit on an indirect heat part of the grill. Lay the fruit buttered side down and don’t move them for at least 5 minutes. After 5 minutes take a peek using some tongs and when you see them all shiny and seared flip them over onto the skin side. Cook for another 2 minutes and then lay them on the baking tray, cover loosely with a piece of foil.
Take a warm peach half and place it on a plate, top with a dollop of the mascarpone cream and a gentle sprinkle of  cinnamon. You can garnish with some fresh chopped rosemary which also adds another awesome flavor to the peaches. You could also use whipped cream or your favorite ice cream as a topping. 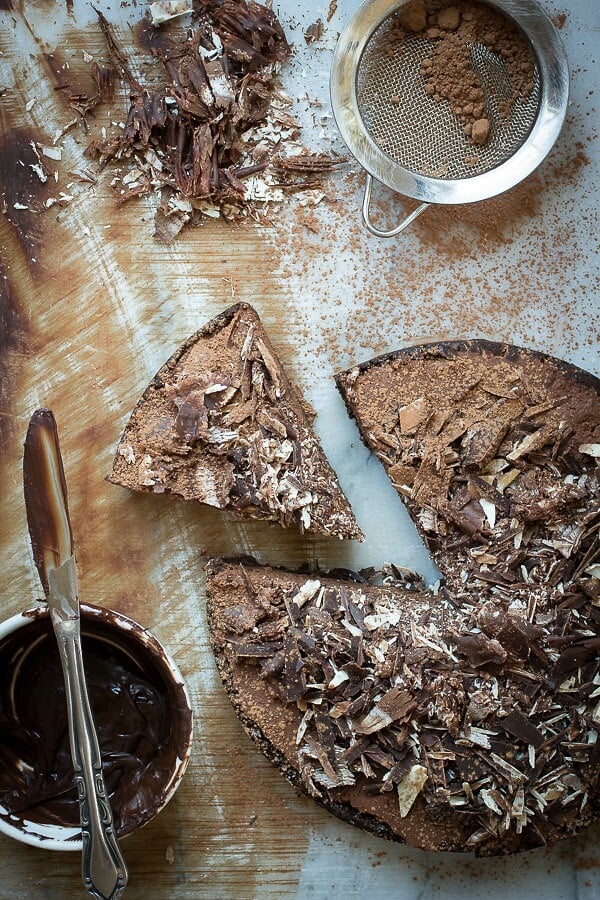 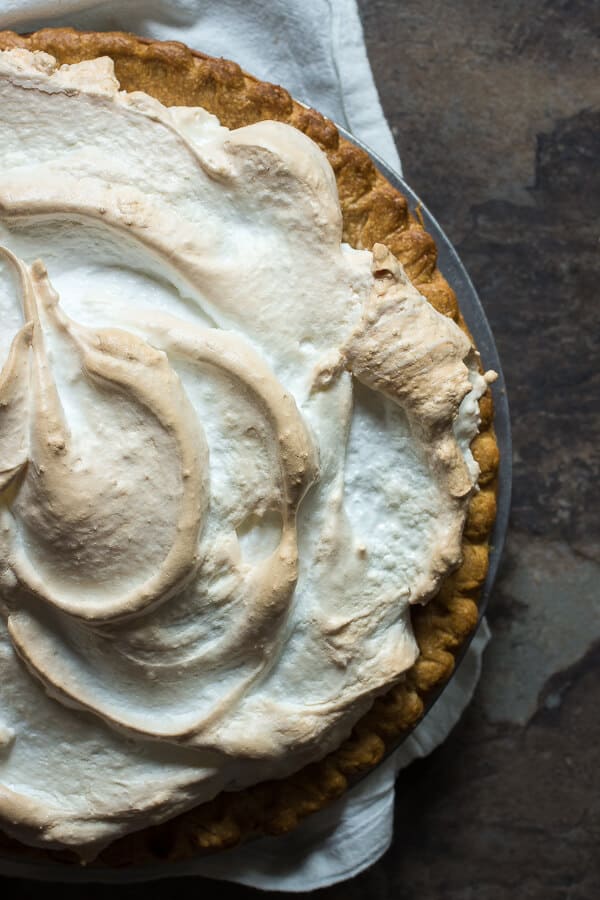 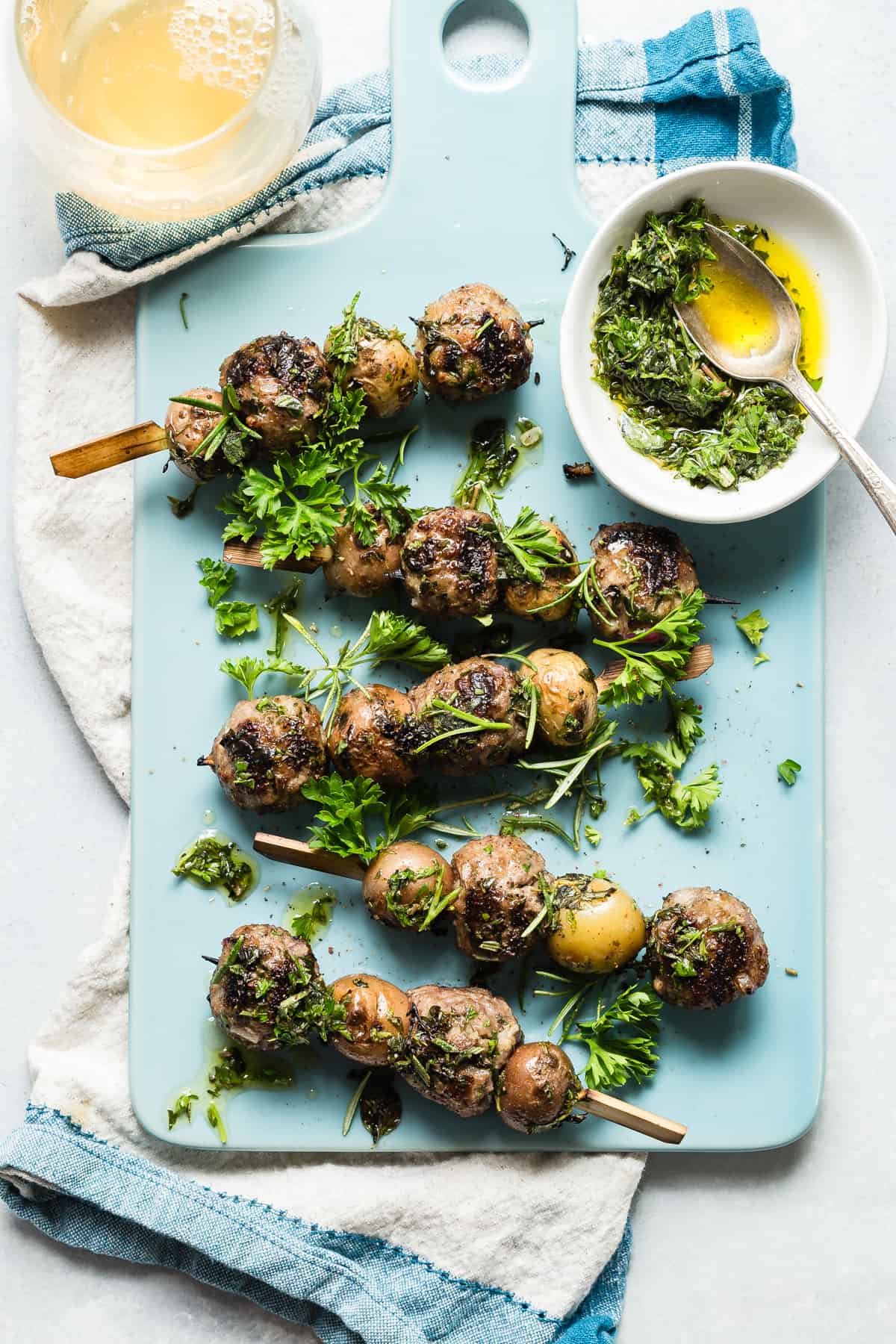 Chocolate Honey Caramels With A Variety Of Salt…