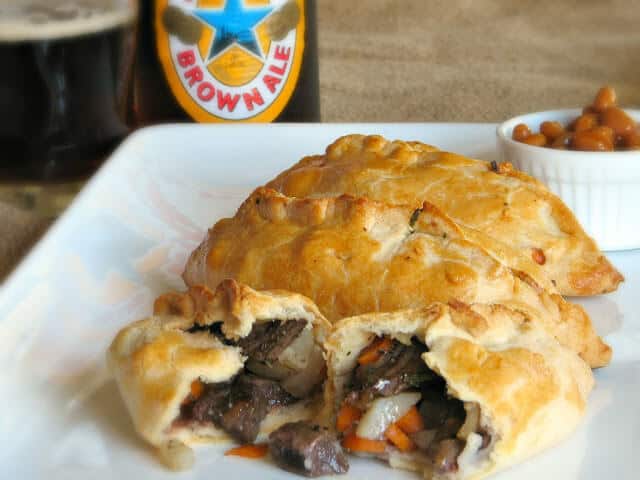 When I Googled the word “Pasties” to do some research for this post I almost fell of my chair! I didn’t know there was another product on the market which shared the name of my beloved meat filled pastry. Maybe some of you are laughing while your reading this, and I’d hope so but if your still none the wiser to what the other meaning of pasties is, go Google it.

Please don’t get the two confused, Meat filled pasties are not designed to be worn on the body (can you imagine the tan lines?) and the other pasties are not made to be served with beef and veggies! I know for sure, I’ll never look at a pasty again without briefly thinking of a pastie, just really briefly I promise!

Moving on quickly…the Olympics are finally here and after watching the opening ceremony and some early games last night I must admit to feeling a little nostalgic towards my time spent growing up back home in Scotland. And then I remembered the 325 days or so of sunshine here in California and the nostalgic bubble went POP! It did get me thinking about some of the things I miss though and food would be among the top five. The Cornish pasty was a product made by the wives of the coal miners in Cornwall, England. They would wrap the meat and veggies in the pastry, making it easy for their husbands to carry underground. It could be eaten cold and some pasties would even have the meat mixture in one half and a sweet dessert on the other half making it a complete meal. Traditionally pasties are filled with beef, turnip, and carrot but you can find a bunch of other flavors from ham and cheese to chicken curry though the folks of Cornwall might have something to say about pasty bastardization. The pasties can be eaten hot or cold making them an ideal picnic munchy or you can eat them like me…with a side of baked beans and a nice dark beer. I used  a Newcastle Ale in the picture otherwise known back home as a “Nooky Broon” aaaaand then I drank it while writing the post…Score! 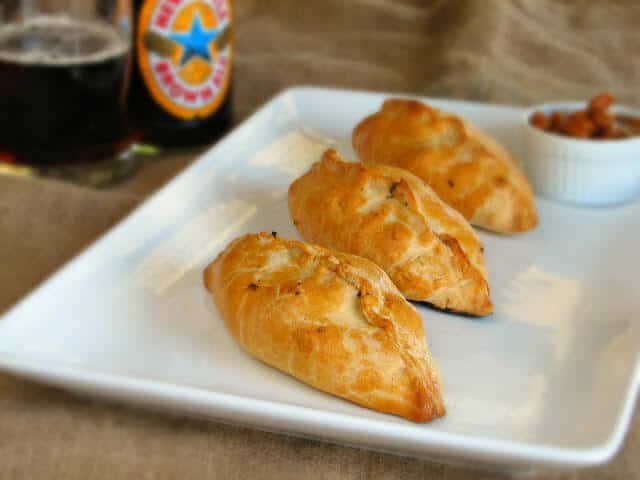 Preheat the oven to 400 degrees.
Place the flour in a mixing bowl. Add the butter and rub through with your fingers or a pastry cutter. Do this until it becomes coarse then add the salt.

Next add the iced water and mix gently with your hands until the dough comes  together in a ball, add some more water if you need to. Wrap the ball in plastic wrap and let it rest in the fridge for 20 minutes.

Take the pastry from the fridge and cut it into two pieces . Roll out one piece until about 1/4 of an inch thick. You need a six inch round circle, I used a plate and cut around it to get the perfect circle. Gather up the scrap dough and repeat with the rest of the dough until you have four discs.

In a hot pan sear the cubed meat with the balsamic glaze and the red wine. Cook it only for about twenty seconds. Dump it into a bowl and add the potato, carrot, and onion. Mix until combined.

Scoop enough of the mixture onto the center of each pastry disc without being too much, about one cup.

Once each disc has the filling, season with salt and pepper and sprinkle the chopped rosemary on top. Brush the edge of the pastry with egg. Pull two side of the dough towards the center of the filling and crimp together with your fingers sealing the pastry.

Glaze the finished pastry with egg and place on a baking tray. Bake in the oven until golden brown.