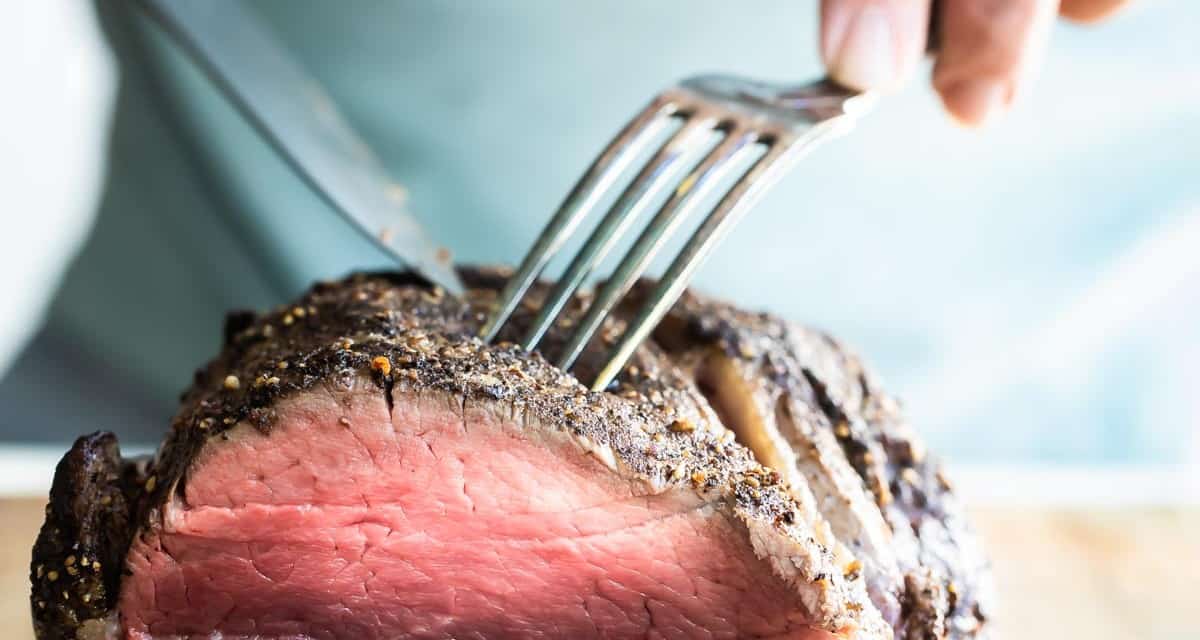 Are you looking for dinner ideas for Christmas? Roast beef tenderloin is a great alternative and tastes amazing with this red wine reduction and your favorite roasted vegetables.

If you feel like something a little different for Christmas dinner, beef tenderloin might be the answer. Usually rib roast is what most people will end up cooking and it’s definitely a great choice, (check out this amazing prime rib for inspiration) but for me, the tenderloin is my favorite cut of meat. The tenderloin is a much leaner cut of meat so many cooks will say it lacks flavor, but I say if that’s true, it makes up for it when you eat a piece and it melts in your mouth like butter!

All about roast beef tenderloin

The tenderloin is leaner because it comes from the back of the cow towards the top. Because this muscle area doesn’t get worked much it ends up being a leaner and less tough cut of meat. The chuck, beef round and brisket are all examples of cuts that come from areas of the cow that are worked often like the front of the animal and the upper legs. These require slow cooking to break down the muscle fiber.

Depending on your butcher, the tenderloin may still have some silver skin on it. This can be trimmed as much as possible but don’t worry if you don’t get rid of every piece. I like to keep my coating simple so a good covering of sea salt and coarse black pepper is all that’s needed with some olive oil to help it stick. It’s important to have the meat at room temperature before searing or placing into the oven. This will help promote even cooking throughout, so try and let the meat rest for up to one hour once seasoned.

Searing the meat helps contain the juices within and also creates a nicely colored and crispy outside. Place an oven safe pan, preferably cast iron on high heat until very warm. Add some olive oil and then place the tenderloin into the pan. It will spit and smoke a bit which is normal. After 1-2 minutes, turn the meat to another side to be seared until most of the outside has been seared. You may have to hold it in place with some tongs.

Beef tenderloin isn’t a cheap cut of meat so the last thing you want to do is overcook it. I highly recommend using a thermometer for an accurate interior temperature. I use the Thermapen but any thermometer will work. The meat cooks pretty quickly so keep a close eye on it with multiple temperature checks from the top and from the side. I like my meat to be cooked to medium rare which is between 130-135 degrees F. Follow this steak temperature chart if you like it a little more (or less) done than that. Always be mindful that the steak has enough heat in it to increase the temperature an extra 5 degrees or maybe more. That means to get an idea medium-rare steak, you should think about pulling it from the oven at 130 degrees.

This step is just as important as searing and cooking so don’t try to rush slicing and serving. Meat has to rest to let the juices created while cooking, find their way back into the meat. The juices will gravitate to the outside of the meat. So if you sliced it straight away, those important juices would end up all over your cutting board, leaving behind a dry piece of meat. Don’t worry about the meat getting cold either, it has plenty of internal heat and as long as you tent it after it comes out of the oven, it’ll be fine. Tenting the meat simply means loosely covering the tenderloin with foil.

A sharp knife is essential. I prefer to use a serrated one like this Wusthof Super Slicer. Slow and easy strokes making sure to let the knife do all of the work for you will create beautiful slices ready to go on the plate. I like slices about a half inch thick but it’s totally personal preference.

FAQs about this recipe

Can I grill my beef tenderloin?

Definitely, just heat your grill to a high heat and then sear it on the hot spot that usually every grill has. After searing, move the tenderloin to an indirect heat and cook. Check the temperature frequently until it reaches your desired doneness.

Does the black pepper make it spicy?

No it does not, it has a very mellow flavor.

How do I reheat any leftovers?

To maintain as much pinkness as possible and without overcooking the meat on a reheat, I recommend heating a pan to a very hot heat. Add a drizzle of oil and then place the any slices of tenderloin into the pan. Sear for about 40-50 seconds on each side and serve at once.

Is the tenderloin better than filet mignon?

As the filet mignon comes from the tenderloin, they are both very good sections to eat but the filet tends to be even more tender than the loin side. That’s what make the filet expensive in any good restaurant.

What can I do with any leftover tenderloin?

You could chop up the leftovers and make tacos or shred them into enchiladas. Homemade chili or lasagne would also work, or place the slices on top of a salad.

Perfect side dishes for this recipe 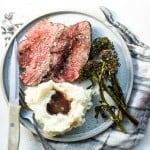 To make the red wine reduction