There’s nothing more like fall than the smell of cinnamon and baked apples!

I’m back with another recipe made in my Crock-Pot Express Crock Multi-Cooker! My last recipe, Baked Lamb with Baby Potatoes, was such a hit with everyone that I couldn’t wait to get going with another awesome recipe.

And because we’re knee-deep in fall and all things cinnamon, baked apples with a buttery brown sugar and cinnamon filling seemed like the perfect way to go!

I’m still in awe of how amazing this appliance is and I haven’t even touched on its slow cooker capabilities yet. Yup, my Express Crock is a pressure cooker and a slow cooker, because when our lives are going at so many different speeds, it’s great to have options. Speaking of options, Crock-Pot just launched two new Express Crock Multi-Cooker models, now available in 4-Quart and 8-Quart sizes, for more options than ever before!

With the pressure cooker function, you can have dinner ready 70% quicker than other cooking methods and with settings like brown, sauté, steam or even dessert, it means you’re looking at a one-pot clean up situation which I’ll take any night of the week!

As I mentioned before, I cooked a whole lamb shoulder in one hour when it would probably have taken 3-4 hours in a conventional oven for the same results. If you think that was fast, these baked apples took only 10 minutes to become soft, but not mushy, and perfectly cooked.

Before the apples are baked, they need to have the core removed. If you have an apple corer, you’ll have no problem. If you don’t you can use a small spoon, it might just take a little longer. Once the cores have been removed, the apples are filled with a mixture of brown sugar, cinnamon, and butter. Just before they’re dropped into the Express Crock I topped them with some French vanilla granola.

Once the apples are done carefully transfer them to a serving plate. Be careful because they will be really hot and I may have burned my fingers on this one!

The final thing any baked apple needs is ice cream, so find the best vanilla ice cream you can and add a giant scoop on top of each baked apple. This is a huge dessert so find a friend who loves baked apples as much as you do, grab two spoons, and dig in! 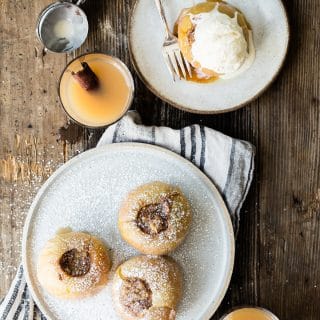