Sopapillas, The Homesick Texan Cook Off….

I had never heard of these little golden puffs of enchantment until they were listed as one of the recipes in my Homesick Texan cook book cook off. I really didn’t know what to expect when I started to read the recipe. The ingredients are really simple and probably in most peoples kitchen right now but the books author, Lisa Fain tells us how after a giant Tex-Mex meal she still could not say no to some sopapillas. I can understand now why she makes that statement. These gems are light and puffy with a fairy dusting of cinnamon and sugar and if that’s not enough to get you ransacking your cupboards for the dried yeast and flour then drizzling honey over them while still hot will!

As I mentioned the ingredients are simple along with the mixing. The tedious part is the frying but the treasure at the end of the sopapilla rainbow is totally worth it. The recipe calls for honey to drizzle on top but I used agave and I also halved the recipe giving me about twelve puffs instead of the listed twenty four. These would be great to eat anytime of the day but I’m thinking breakfast time for some reason and maybe slice of the top and fill them with some whipped cream, I can hear the gasps from the sopapilla union cringing at the thought of violating the pastry with cream. Just a thought…

Here’s the recipe courtesy of The Homesick Texan:

For the dough- makes about 24
1 Tbsp or 1 packet of dried yeast
1 1/2 Cups of warm water
4 Cups of AP flour
1 Tbsp of sugar
1 tsp of kosher salt
1 Tbsp of unsalted butter, melted
vegetable oil for frying, I used canola

Mix the yeast and the water and let sit for about 5 minutes. Meanwhile combine the flour, sugar and salt. Add the melted butter to the yeast mixture and then slowly stir that into the flour mixture.
Mix well until combined. Knead the dough for 2 minutes until smooth. Put it into a greased bowl and cover. Let sit for 1 hour or until doubled in size.

After the dough has risen, punch it down on a well floured surface; then roll out into a 1/4 inch-thick rectangle. Using a knife or a pizza cutter, cut out 3-inch squares and then cut the squares into triangles.

Heat 3 inches of oil in a large pot to 350 degrees. Fry 2 triangles at a time in the oil for 1 minute each side. The dough should puff when it hits the oil. Drain the sopapillas on some kitchen towel, then sprinkle with a mixture of 2 Tbsp of cinnamon and 2 Tbsp of sugar. Serve hot with honey. 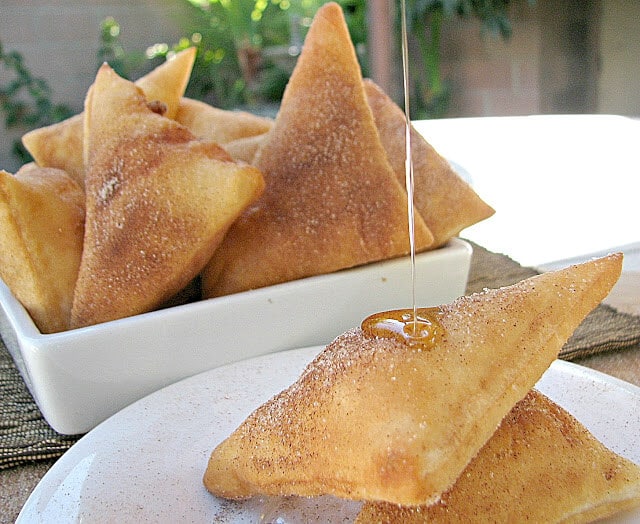 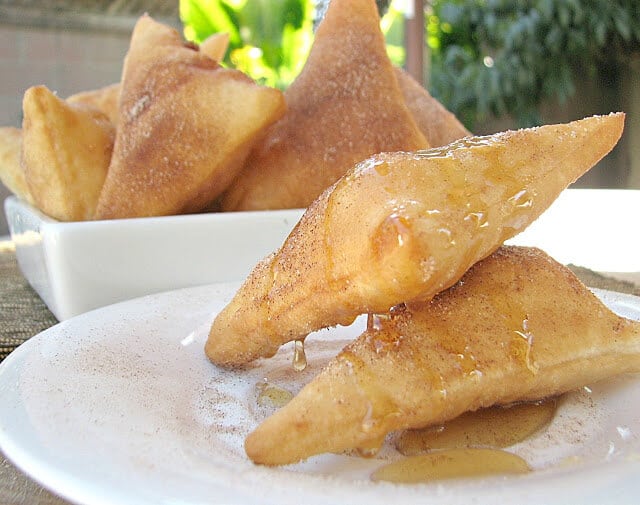 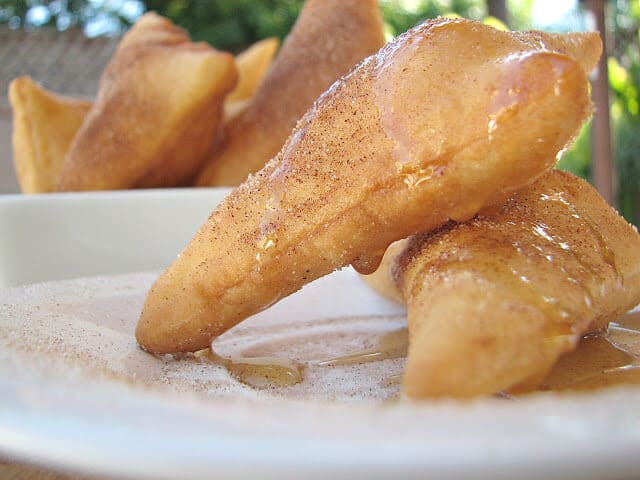