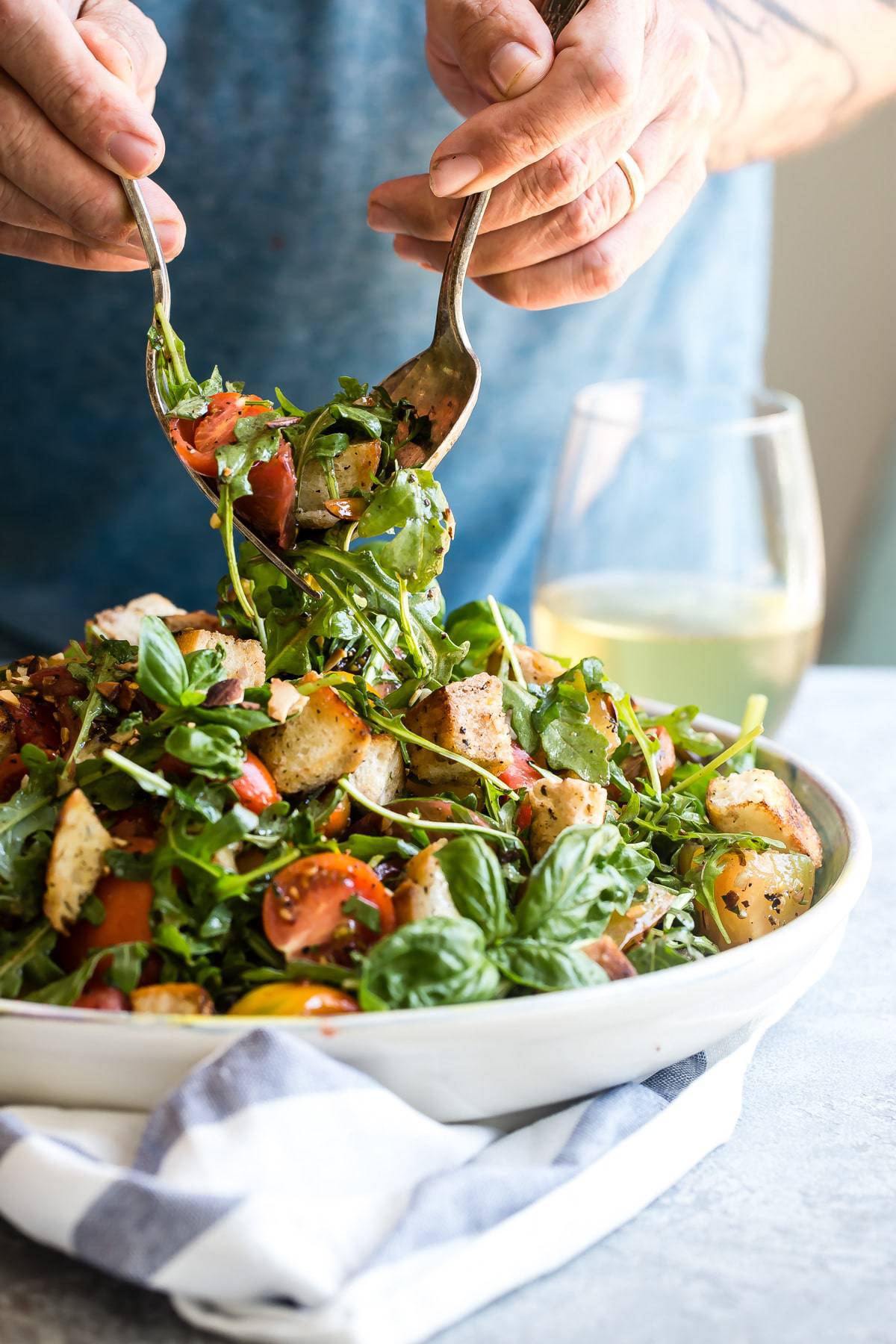 A traditional Panzanella Salad made with fresh heirloom tomatoes and crusty bread. This popular Italian salad is perfect to serve with steak or seafood and  comes packed with flavor! 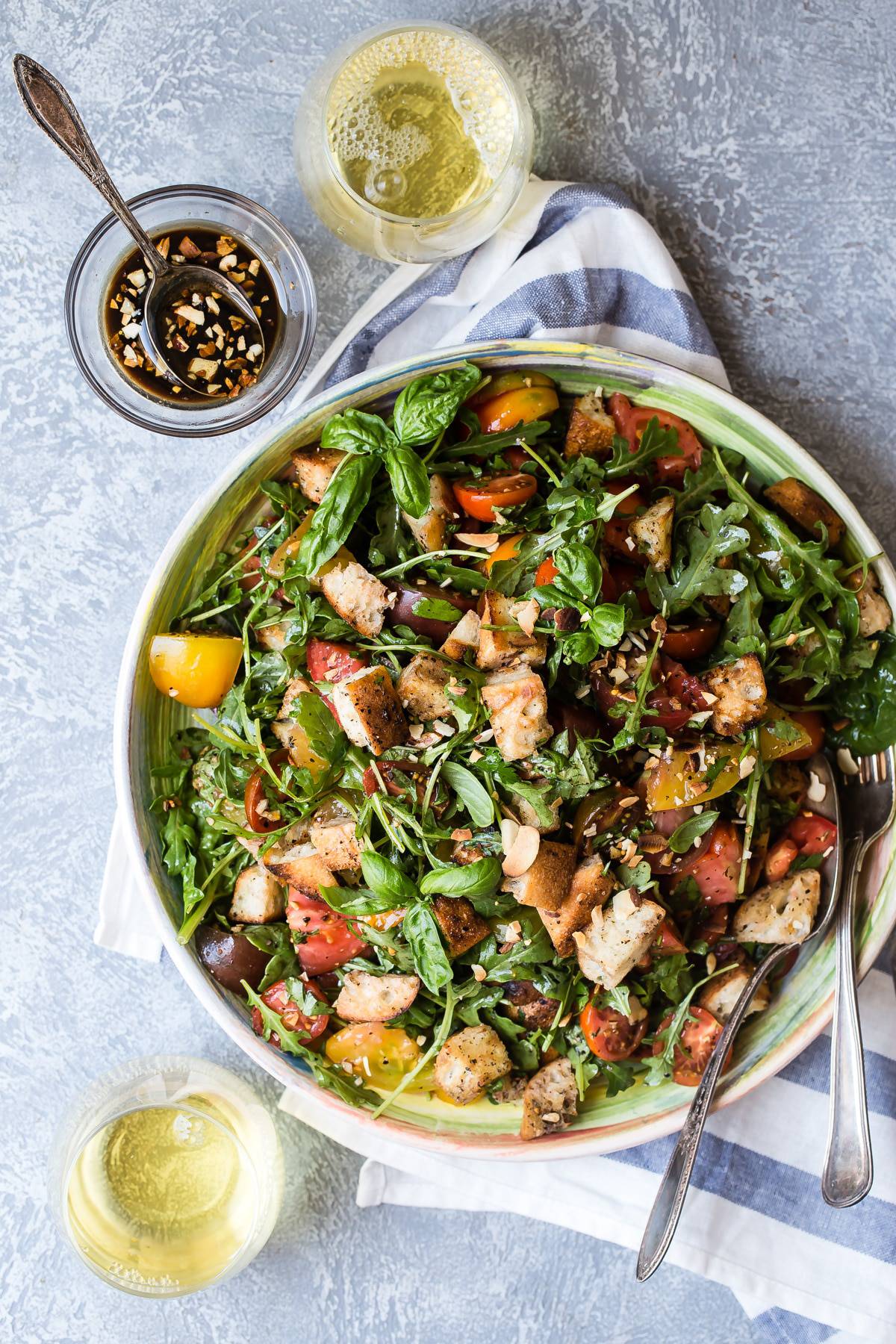 Guys, do you get mesmerized as much as I do when you see heirloom tomatoes at the store? The colors and shapes are so much fun and it’s hard to find any two alike.

So when I saw these I bought them straight away with no recipe in mind, and then I discovered Panzanella Salad and all was good in my kitchen!

Sure you could make a panzanella salad recipe with regular old tomatoes but wow, if you get some heirloom’s at the right time they taste really fresh and sweet and juicy. You’ll be blown away by them! 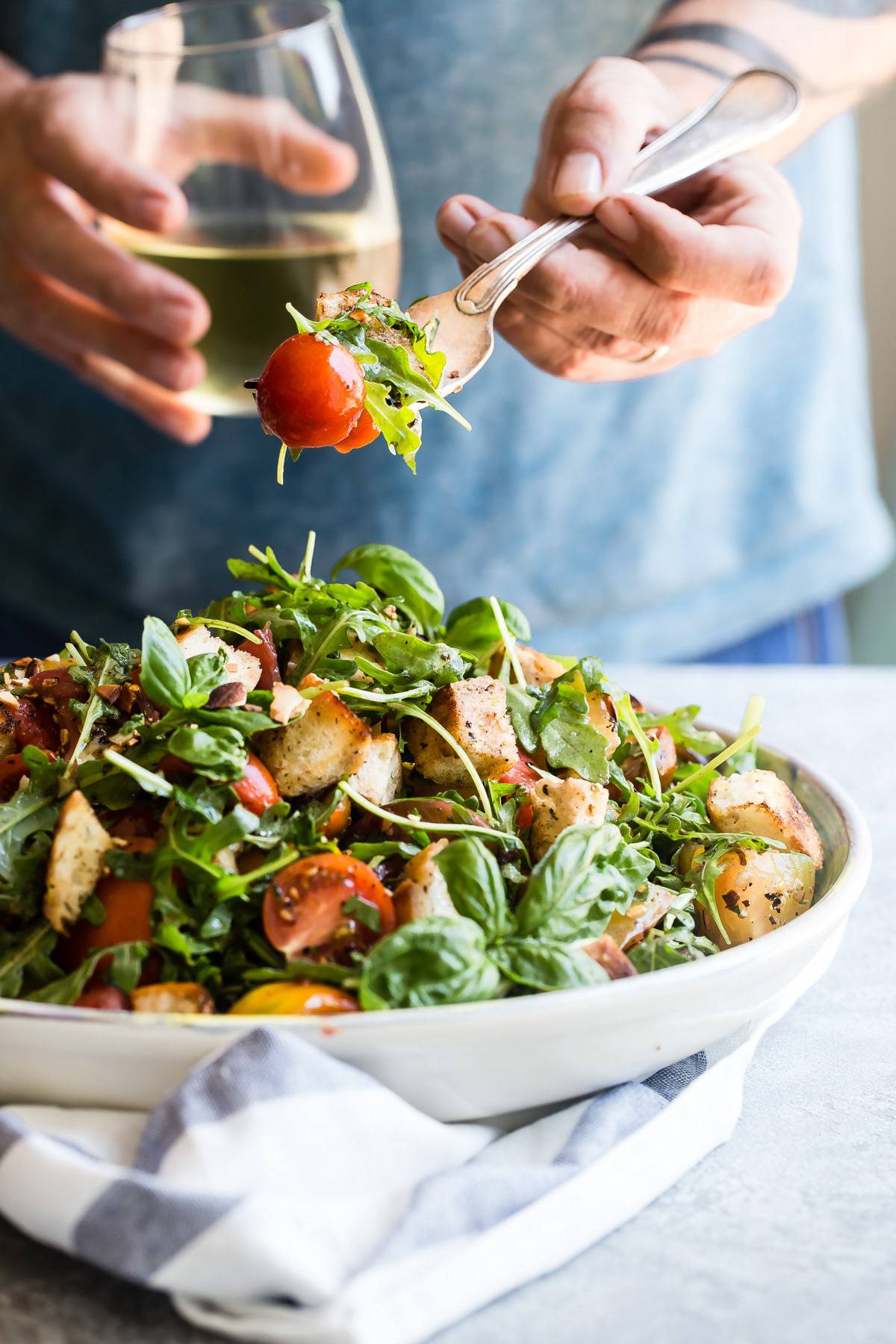 What is Panzanella Salad?

Panzanella salad originates from the Tuscan region of Italy. The name comes from a combination of the bread and a deep dish that it was usually served in. It’s a great way to use up any stale bread you might have lying around and it’s easy to make needing only a few ingredients.

Panzanella salad with lettuce or any hearty green leaf, is one of those recipes that you can make for a hungry crowd and know that it’ll disappear in a hot second. My blog is full of recipes like that because I’m a big fan of making the most of the awesome weather we get here in California. Parties, potlucks and even just regular weekday dinners I always try to eat outside and use less heat inside. This Mozzarella and Heirloom Salad is another great example of freshness! 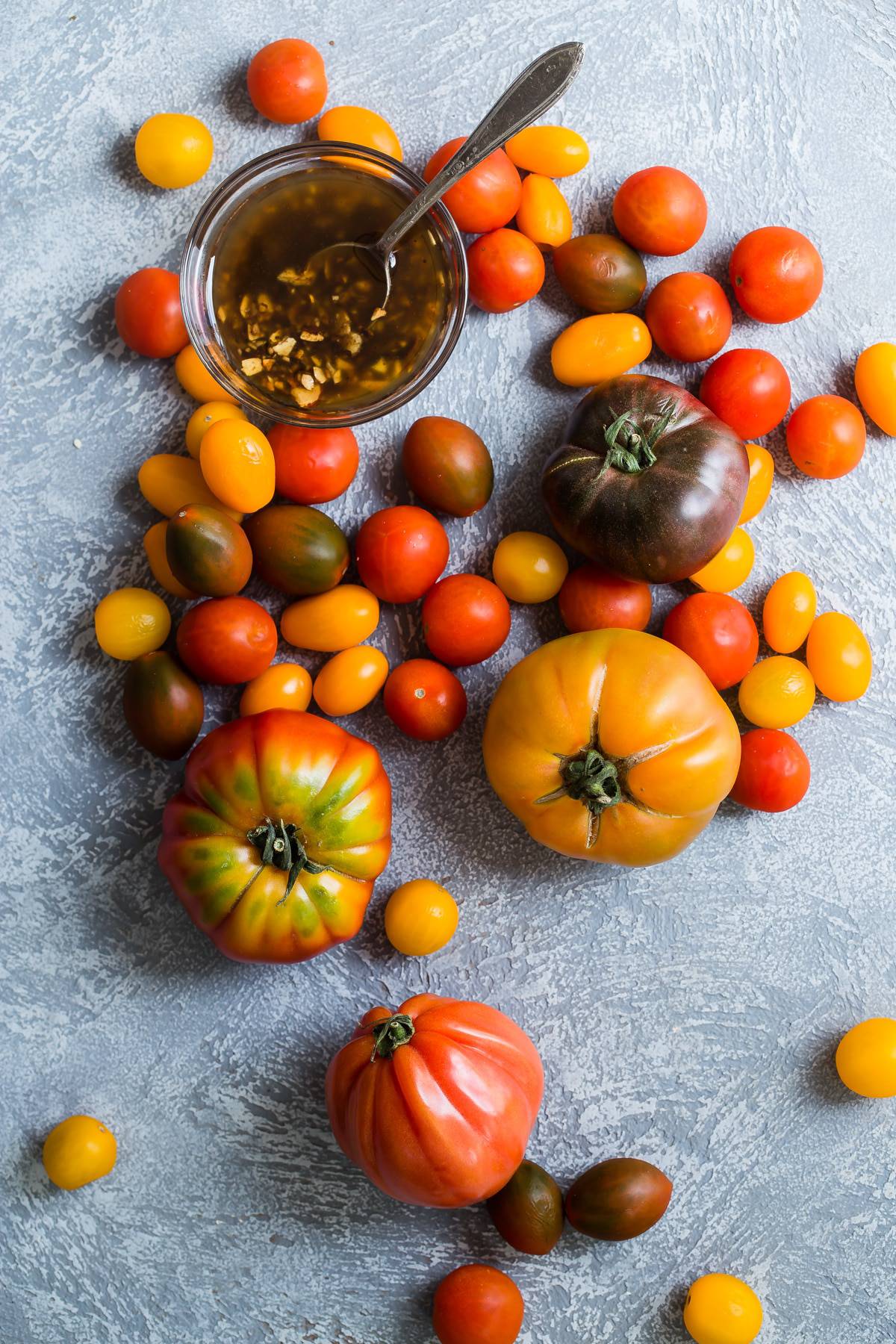 Tips for making my Panzanella Salad

If you don’t have stale bread you can easily use any crusty loaf and either bake it in the oven or I like to slowly toast it in a pan with some olive oil and dried basil. Don’t use regular sandwich style bread.

You can prep the salad ahead of time but don’t add the dressing until right before serving.

Usually, I’d remove the seeds when I’m making anything with fresh tomatoes, but with these awesome heirlooms, we want to use up every part of them. I found some cherry tomatoes in the fridge and this was the perfect way to use them up mixed with big chunks of the heirloom tomatoes.

What’s in a Panzanella Salad dressing?

Finish the salad with a simple balsamic and olive oil dressing, I also threw in some toasted chopped almonds but you could leave these out if you prefer.

Happy summer and cheers to loads of tasty fresh salads!! 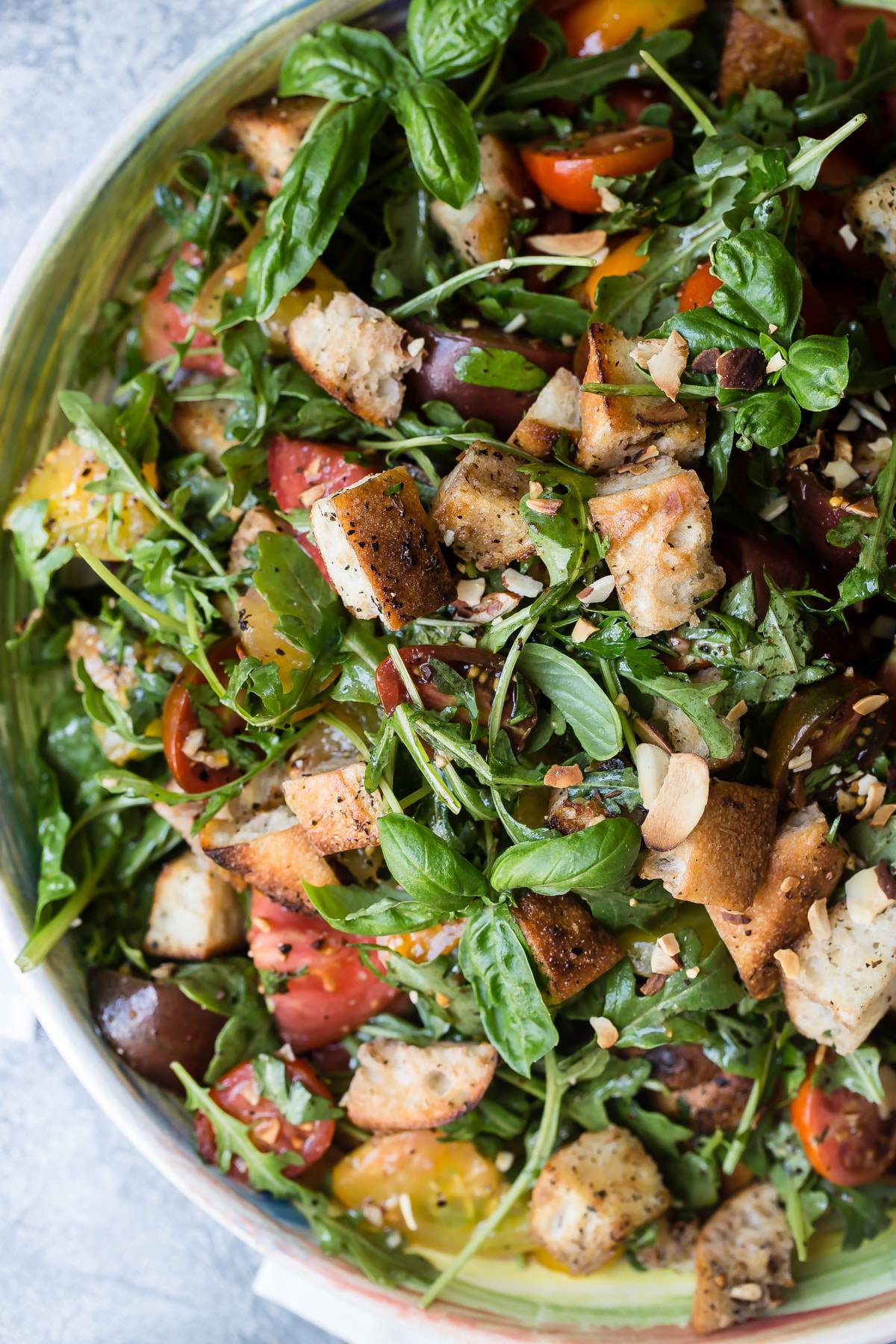 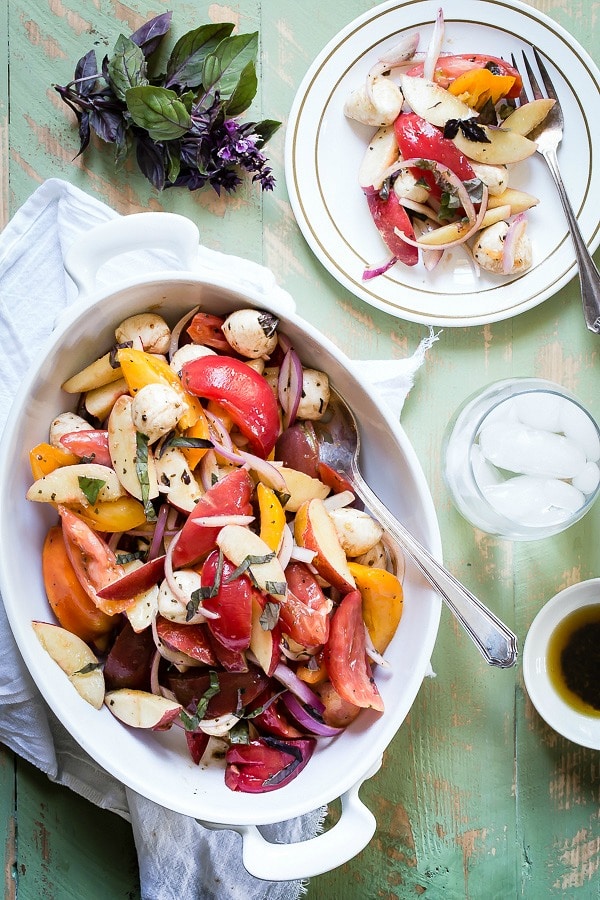 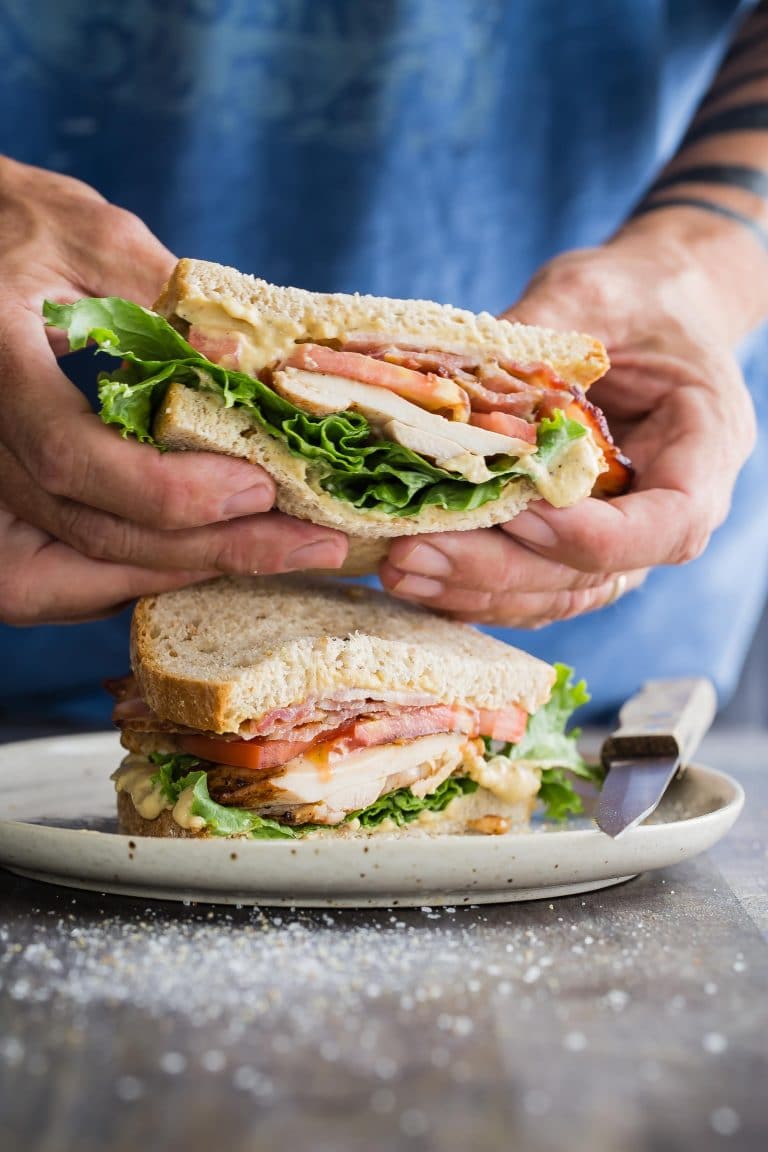 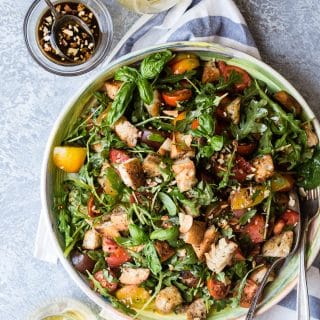 for the toasted bread