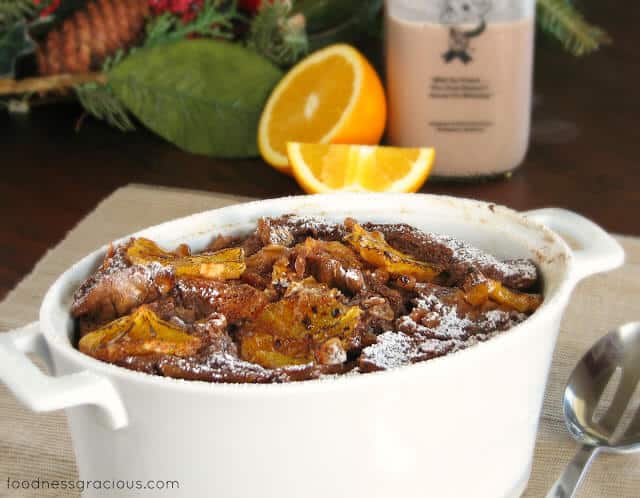 Did you ever wake up on Christmas morning and know that at some time during the day, you’d be munching on one of those chocolate oranges? If you’re British like me, this thought may occur more often than not. I must admit I liked them but they seemed to stop coming once I became all grown up and moved to the States. (That was a sneaky little gift idea I threw in there just in case someone- anyone- is still wondering what to buy me for Christmas – throw me a chocolate orange and I’ll be your friend forever!)

Chocolate and orange is one of those great combos, especially if it’s a dark bittersweet chocolate. I adapted this recipe from Martha Stewart mainly by switching her ever so slightly boring regular milk for a thick, rich chocolate milk from Broguiere’s Dairy. I figured if you are going to make chocolate bread pudding, try and make it as chocolate-y as possible. I actually thought it’d have been easier to find a chocolate bread to use as the base, but I had zero luck and I just couldn’t take any more store clerks giving me weird looks and repeating what I had just asked them.”Chocolate bread?” (insert blank stare) I ended up using challah bread which is a great choice for bread pudding, as is cinnamon bread or even brioche if you can find that. Some cooks swear by using day-old French baguettes but I think those need lots of liquid and a good long soaking. I also chopped up some pieces of orange and mixed it through the layers of challah, finally laying some slices on top. After the pudding was baked, I gave it a whirl under the broiler to caramelize the orange slices. 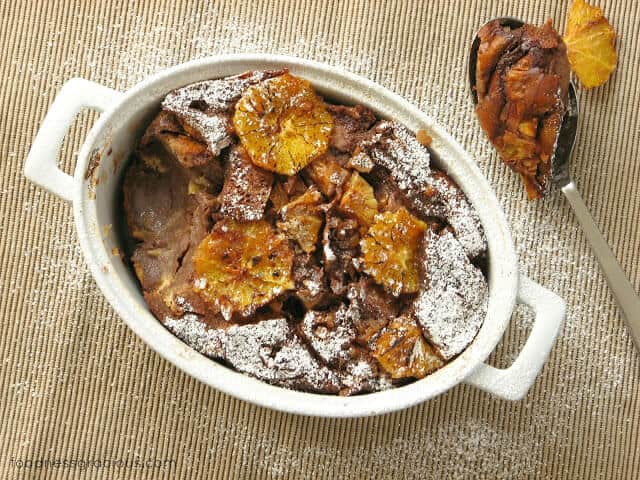 Let me mention the chocolate milk I drank used. It comes from a family owned and operated dairy here in Southern California. The Broguiere family have been making various dairy products for many moons and selling it in large, old fashioned glass bottles. They say that the milk tastes better having taken on no other flavors from a carton. Another amazing thing they sell right now is eggnog – bright yellow and thick like a milk shake, this is also known as liquid gold! If your lucky enough to see some, buy it. It’s not the cheapest but the taste is lotto-winning super delicious, and there’s a cash deposit refund when you return your bottle!
Serve this bread pudding warm, dusted generously with powdered sugar and a dollop of good vanilla ice cream or some caramel sauce drizzled over it like I just had!
Recipe for Chocolate Orange Bread Pudding adapted from Martha Stewart Living
Prep Time- 25 minutes    Bake Time- 35-40 minutes    Serves- 6
1 Tablespoon of butter plus extra for buttering your baking dish
10-12 thick slices of challah bread, brioche or day old croissants can also be used
1 large orange, peeled and half thinly sliced and the other half roughly chopped
2 cups Broguieres chocolate milk, or the richest you can find
3 ounces of dark chocolate
2 large eggs
1/2 cup granulated sugar
1/2 teaspoon vanilla extract
Powdered sugar for dusting
Preheat the oven to 350 degrees. Butter an 11x7inch baking dish and set aside.
In a small saucepan heat the milk, butter and chocolate stirring until melted and combined. Turn off the heat. Slice the bread into thick slices and roughly tear pieces to fit in the baking dish. Lay one layer on the bottom of the dish and sprinkle some chopped orange on top.
Proceed to layer the bread in the dish like this until you are almost level with the top. In another bowl, whisk together the eggs, sugar and vanilla until well mixed and starting to turn light in color, about five minutes.
Pour about one cup of the hot milk mixture into the eggs and whisk until mixed. Add some more milk and whisk gently. Repeat until all of the milk has been added to the egg.
Pour the mixture over the bread making sure to cover all of it. Let sit for 10 minutes. Bake for about 35 minutes or until puffy and springy in the middle. Transfer from the oven to a preheated broiler and heat until the oranges begin to brown.
Let cool for at least 20 minutes, dust generously with powdered sugar and serve. 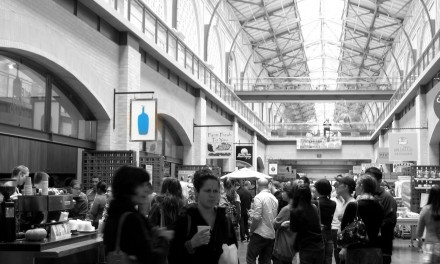 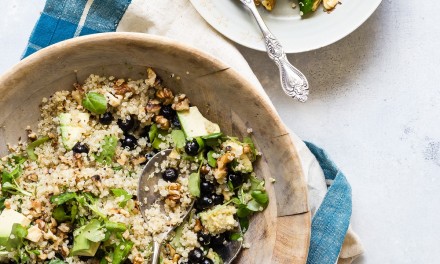 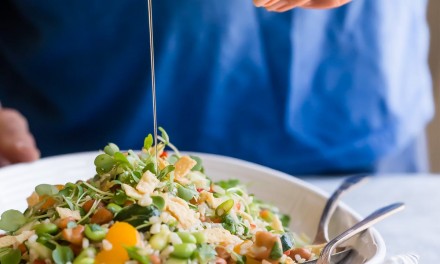