Is it just me or does anyone else think it’s stressful being a food blogger? I’ll use this recipe post as an example, after cooking this chili for almost four hours and liking how it looks, the time comes to pull the trigger on the meal. After all, this is whats for dinner and I have other hungry mouths to feed, but wait I have to get some pictures before the sun starts to set or everything will just look yellow and blah under the kitchen lights. I chose a small window of time to make a set for some pictures while my wife went to pick up my daughter from an after school class. Perfect I thought, I’ll take the pictures and by the time they return I can just serve the food and all will be good. tummies will be full and I’ll be a kitchen hero.

WRONG! I didn’t take into account the screaming almost two year old who wants to eat right at that second and who followed me out to where I had set up my stage area and who didn’t want to play with any of his toys in the yard. No, he just wanted to stick his finger in the middle of my cornbread just as I’m trying to focus in on some nice close up shots! Since I had only taken about three pictures I decided to put the little cornbread vandal back indoors. This was not in his plan but I’m bigger than him so I won. I went back outside to try and salvage the hole, all the while it’s getting darker and I can see my pictures disappearing in a haze of dullness which no exposure setting can ever fix and then lo and behold the gardener turns up and I’m sure is looking at me like I’m either setting a place for him and he’s having some nice chili before he starts on my yard or I’m just another crazy customer of his. Either way I didn’t look up and kept clicking.

I scooped up the food and dived back inside much to the dismay of the gardener probably, and after explaining to the little guy that daddy is not crazy and lots of people take pictures of food I proceeded to start to serve dinner. Everyone was happy and nobody got hurt (except the cornbread). 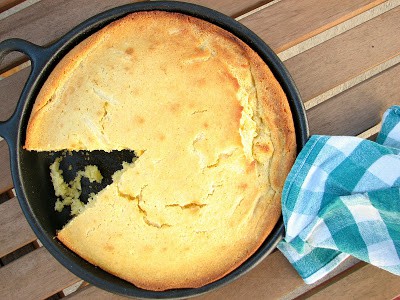 The cornbread was very good and I was drawn to the recipe because it had buttermilk in it. Buttermilk just cries out moist to me and it has that tangy taste to it. I will definitely use this recipe again. I also added some grated Fontina cheese to it. You can add just about any kind of hard cheese but Fontina was what was lurking in my fridge and had to be used up. Other add-ins could be chopped chillies, bacon or whole corn kernels. 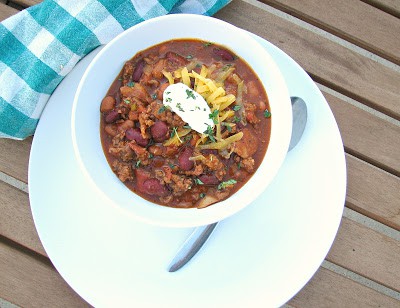 The chili was excellent. Slow cooking it for that amount of time really made a difference. It became a rich thick stew consistency with great flavor. I did alter the original recipe a bit by adding bacon and substituting the water with beer. Anything with bacon and beer is going to taste amazing in my opinion and I topped it with  some grated smoked cheddar. I probably wouldn’t change anything about this recipe next time I make it, which will be in two days when It will accompany me to a Halloween pot luck party, It was that good! I would love to try it poured over some french fries with cheddar or even mixed in with some Frito’s corn chips though!
Cornbread recipe courtesy of Michelle’s Story:
1/2 cup butter
2/3 cup white sugar
2 eggs
1 cup buttermilk
1/2 teaspoon baking soda
1 cup cornmeal
1 cup all-purpose flour
1/2 tsp salt
Preheat the oven to 375 degrees. Melt the butter in a heavy skillet and add the sugar. Mix until blended and take off the heat. Add the eggs and mix well.
Add the baking soda to the buttermilk, mix and then add to the pan mixing well. Add the cornmeal, flour and salt to the pan and gently stir to combine. Pour into a greased 8inch square pan or I used a cast iron skillet and bake for about 25 minutes or until springy in the center. If you are adding any other ingredients just add them after the cornmeal and flour step.
Chili recipe adapted from Food.Com:
1lb Ground beef
6 Slices of bacon roughly chopped
1 14oz Can of tomato sauce
1 14oz Can of pinto beans (with liquid)
1 14oz Can of kidney beans (with liquid)
1/2 Cup diced onion
2 Green chillies diced, I used Serrano’s and only put in one. I chopped the other one and added it to my own bowl as I’m the only daredevil in the house
1 1/2 Medium tomatoes, chopped
1 1/2 tsp of cumin powder
1 1/2 Tbsp of chili powder
3/4 tsp black pepper
1 tsp salt
1 Cup of water, I substituted the water for beer. A dark one would be preferable but any could be used.
Brown the bacon until almost crispy. Add the beef and brown. Drain off the fat and add the meats to a large enough pot.
Add the rest of the ingredients to the pot and simmer over a very low heat for about at least 3 hours, stirring every 20 minutes or so. I used a lid but found that taking it of after about 2 1/2 hours and cooking with no lid for the last 30-40 minutes helped the chili become more thick and rich.
Top with sour cream, onions and grated smoked cheddar and cornbread on the side.
Please take a moment to read about my friends fundraising activity below!

I would like to mention a good friend of mine and her quest to raise money for two very deserving causes – Charity Water and JDRF. These are two awesome foundations which are around solely to help others less fortunate. Some of you may know already about JDRF and my whole bake sale fundraiser and as Andrea is a walker on our team she has kindly chosen JDRF as one of her causes. Andrea is selling Advertisement spots on her lifestyle blog, Four Flights of Fancy, which receives a high number of traffic and visitors so getting a spot on there could be really beneficial to your online business. Every dollar she receives from the advertisement spots will go back to Charity Water and JDRF! Go visit her blog and check out the requirements, it’s a cool place and I bet you’ll keep going back.