Up until a month ago I had never used blood oranges in cooking. I knew about them and loved the mellow taste but then recipes started popping up all over the internet. Some bloggers even mentioned having their own trees; I really have to get on that once the weather gets better. An abundance of these fruits wouldn’t be a bad thing; the kids were going crazy over them. 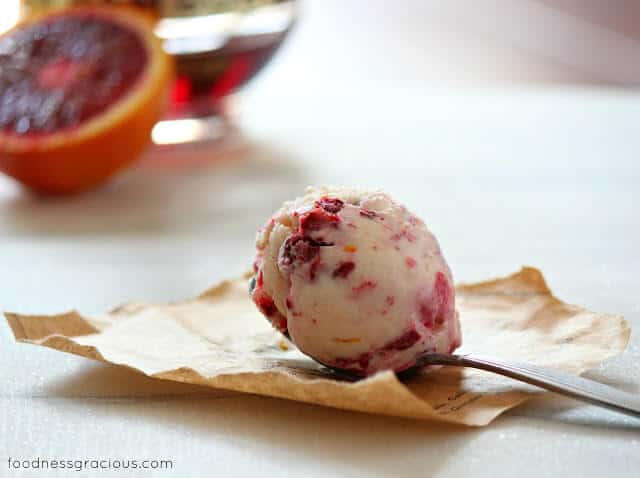 Ice cream. Homemade and creamy and a big fat easy to make! So easy a monkey could do it, and if you come across one doing it…Instagram it fast! I don’t even know if monkeys like ice cream but I do. I’ve only used my ice cream machine twice since Christmas but I have a feeling it’ll be running 24/7 through the summer. My first churn was this salted caramel with pistachios and rosemary and it was so damn good. If Haagen Daz ever have another create your own flavor competition I’m entering it! This time I took a bunch of those oranges and made a syrup with the juice. I cooked it down with some raspberries and Chambord until the berries turned all mushy. At this point I could have packed the Cuisinart away and just sat and ate the berries from the pan, but that would have been dishonest. I think I had mentioned to the kids I would be making ice cream and they don’t forget…ever-actually they’re very selective on the forgetfulness-so I carried on and this new flavor was born churned.

Two for two, I wonder what number three is going to be? 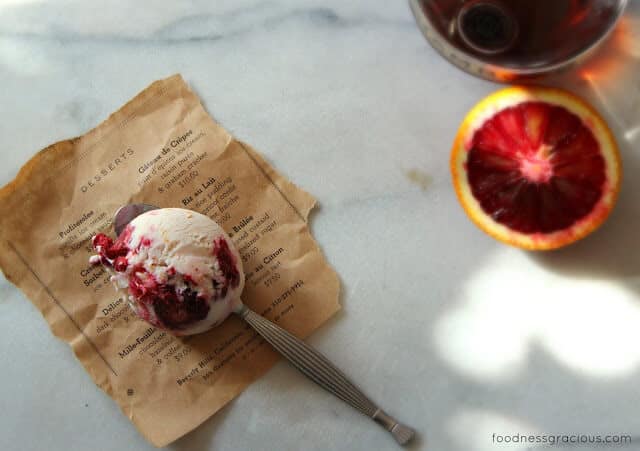 Place all of the ingredients in a small saucepan. Bring to a simmer and cook on low for about 20 minutes or until it becomes thick and the raspberries are soft. Set aside and let cool.

For the ice cream-

Mix two tablespoons of the milk with the cornstarch. Whisk the cream cheese and the salt together in a medium bowl. Mix the cream and the corn syrup together. Have a large bowl filled with ice.

Heat the sugar in a 4 quart pot over medium heat until it turns a deep amber color. Watch it carefully because it will burn very quickly. Remove from the heat and add about 1/4 cup of the cream/corn syrup mix to it.

Keep adding the cream while stirring all the time. Add the whole milk and return to the pan. Bring back to a boil and boil for four minutes. After four minutes take off the heat and whisk in the cornstarch mixture.

Bring back to a boil stirring continuously until it gets thick, remove from the heat. Gradually mix the mixture into the cream cheese until smooth. Pour the mixture into a large zip lock bag and store in a bowl in the fridge or fill the bowl with iced water and chill for about 30 minutes.

Once the mixture is cooled, pour it into the ice cream maker and follow the manufacturer’s instructions. After the ice cream has formed, about 25 minutes scoop about 1/4 into a plastic container. Spoon some of the raspberry sauce over the ice cream and sprinkle some chopped orange chunks over too.

Repeat this process creating layers, until all of the ice cream has been transferred from the canister. Cover with parchment paper and seal with the lid. Place in the freezer for at least four hours before enjoying.

AND GET A FREE COOKBOOK!

How To Cook Perfect Cod 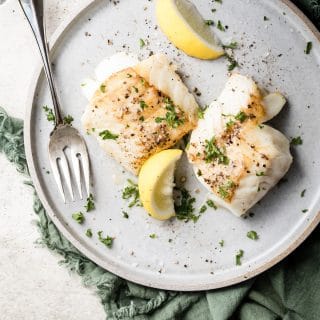 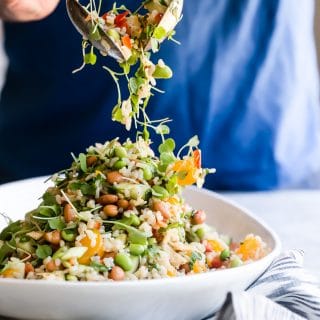 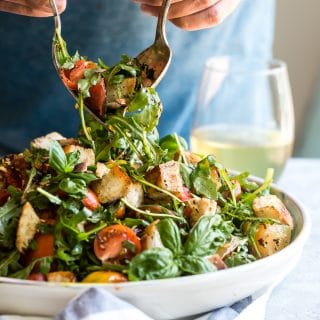