I recently took a trip with the family on an Alaskan cruise. This was our third cruise and all with the same cruise line…Disney. I never pictured myself as a cruiser kind of guy, but going on Disney Cruise Line has us a tad spoiled now. The service and kids activities are well above expectation, but it is Disney after all. If anyone knows customer service, they do. Let’s not forget the adults, either – we were on a ship full of princesses and Mickey Mouse, but they sure don’t leave out the grown ups! Disney still manages to pack in some after-hours fun when the kids eventually fall asleep.

Our trip started with a few days in Vancouver. This is where the ship departs and it was my first time in the city. Downtown Vancouver is clean and busy, but doesn’t feel like a place where you could get lost easily. We stayed at the Hyatt Regency on the advice of my in-laws, which is within walking distance from the port. Downtown is about 25-30 minutes from Vancouver International Airport, and public transport is available using the Canada Line. The Granville Island Market is a must see, set right beside the water next to the Granville Street Bridge. It’s full of amazing food choices and street entertainers. The actual indoor food market reminded me of a smaller scale Boqueria in Barcelona; there’s everything you need to create a first-class meal, all from local artisans. I could have wandered around here forever.

Getting around Vancouver seemed fairly easy. We didn’t rent a car as we only had two days to spend, so we made good use of the hop-on hop-off trolley buses. There’s a red line and a blue line, each taking you to a different area of the city. We stuck with the red line and our travels took us to Stanley Park. The park is a great place to take kids. You can visit the giant tiki display, ride your bike around the park perimeter, take a train ride or just ride the bus, taking in the sights and listening to the driver explaining the history all around you (including Lions Gate Bridge, above, which was owned by the famed Guinness family of Ireland until it was sold in 1955 to the government). 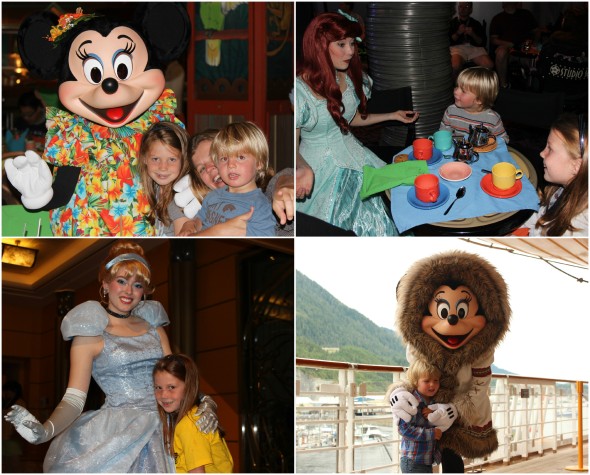 One key feature of Disney cruising is unfettered access to Disney characters all the day long. They adhere to scheduled times where you can meet them and take pictures, but it’s also quite normal to see them walking around on their way to/from a meet and greet. This is best as you don’t have to wait in line and you can have them all to yourself! Quinn was a little shy at first when getting close to them, but by the end of the trip he was a seasoned Minnie Mouse hugger, even enjoying his “tea party” with Ariel. It was like they were long-lost friends. 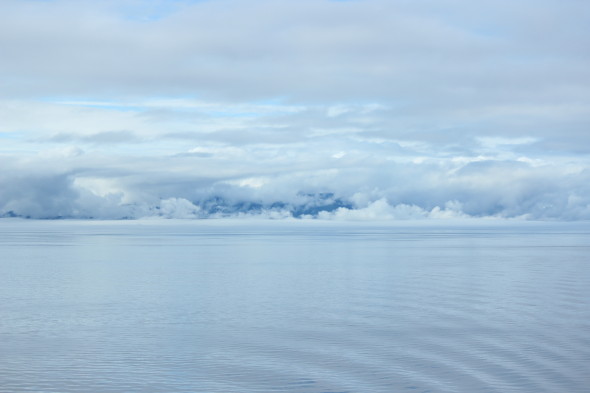 Once you leave the port and travel north, the scenery becomes jaw-dropping. I really enjoyed just standing up on deck and watching the world go by. The weather wasn’t freezing cold – maybe high-50’s to mid-60’s – but a sweater or light jacket was always needed. My favorite way of describing Alaska: it was like standing on top of the world and looking down. Living close to the hustle and bustle of Los Angeles, it offers a new appreciation for the fresh air and nature all around. 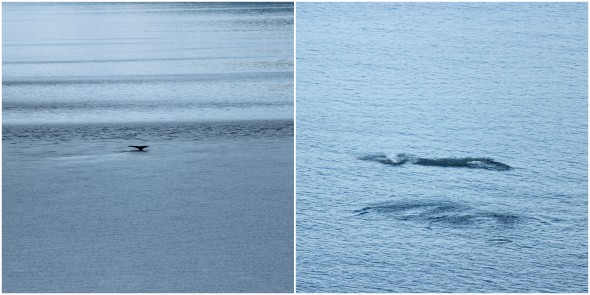 Being a food blogger I used to think photographing ice cream or meat was really frustrating. That was until I met these whales (or should I say, tried to meet them). I managed to get these pictures, but my hopes of seeing a giant orca propel out of the water with glistening drops of water everywhere was just not going to happen. I have a new appreciation for photographers who capture those kinds of pictures for magazines and books. I also wanted to rent a better zoom lens for the trip – the one I use is only a 250mm and with so much ship-to-shore viewing, I’d recommend a 300mm at least. Still, I was really pleased to see these and lots more breathing spouts shoot up in the air. Once again it just takes you so far away from everyday life. To see animals like these in a natural habitat and not Sea World is amazing! 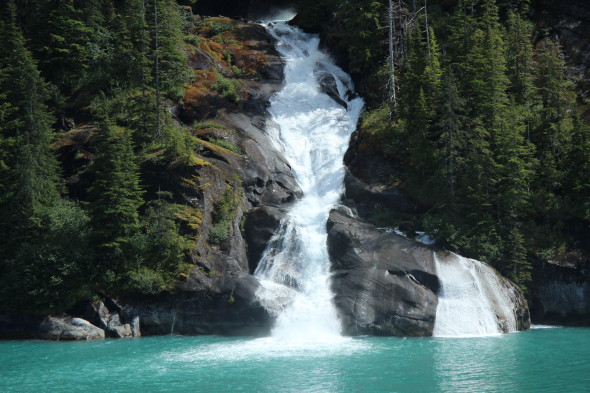 My Alaska travel began with an adventure through Tracy Arm, a fjord near Juneau. While cruising up the fjord, we came to within a hundred feet or so of the shore. The farther in we got the more common it was to see floating clumps of ice pass by. This ice is falling – or calving – from the Sawyer glacier, which was the final destination at the end of Tracy Arm. There are no whales in Tracy Arm due to the difficulty they have communicating with each other. Being so close to the shore, their clicks and whistles bounce off the rocks and get them confused. This is also the reason why the fjord is packed with smart seals, who can avoid being whale lunch for another day. 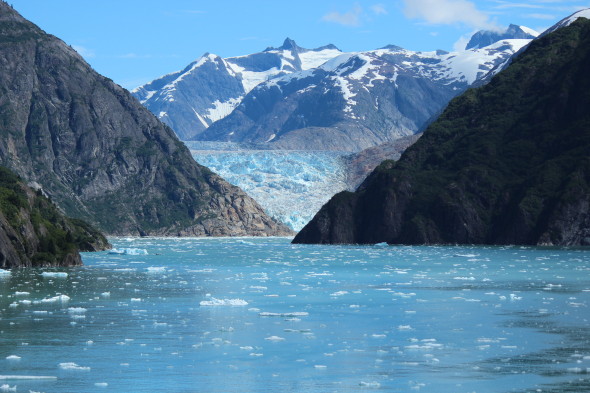 Sawyer glacier runs north to south. This is the south side and there was no ice calving when we visited it. I was a little bummed – it’d have made a stunning picture, but after watching this video I might just be thankful it didn’t calve! The crystal clear blue color seen in the ice is due to it being so dense and absorbing all the colors of the spectrum except blue, which gets reflected back. If the ice is white, it means it has many more air bubbles in it. 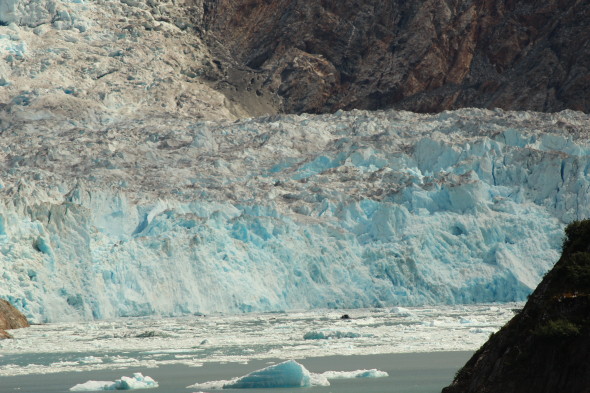 Trying to capture something like this in a photograph is really difficult. The sheer magnitude makes you feel so small and unimportant. Even a giant thing like a cruise ship still feels small. We heard the blocks of ice banging off the ships hull as it creaked it way to the end of the fjord. A cruise staff member even picked up a piece to bring on board for the kids (and me) to check out up close, which was very cool. As I stood shivering, staring at the glacier before the captain turned the ship on a dime, I looked around and everyone was quiet. This was a great and humbling way to start our adventure. 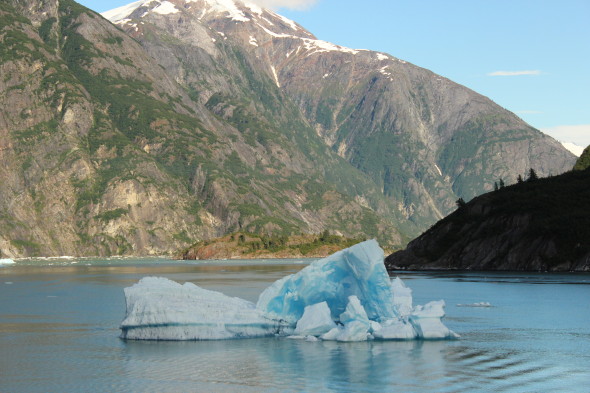 If you made it this far through my travelogue, give yourself a high five! In my opinion, this trip was just too good not to share, and as much as I want to post all 880 photos I took (OK, 423 after editing), I wouldn’t do that to you. However, there are some others that I would love for you to see. So Alaska Trip Recap #2 will be along soon, and we’ll be moving onshore to do some fun excursions, all of which involve food. Can you guess who was in charge of choosing those adventures? HA!